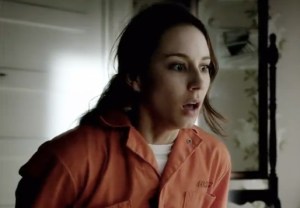 For weeks, ABC Family has been promoting the “Big ‘A’ Reveal” in Tuesday’s Pretty Little Liars season finale (8/7c), but make no mistake — even after the episode draws to a close, the series’ central mystery will remain far from solved.

“In a certain way, you will know who ‘A’ is by the end of the episode,” executive producer Marlene King tells TVLine. “I don’t want fans to feel like, ‘Oh, they’re just being dodgy again.’ We’re not. You will get a very big piece of the puzzle. It’s like I’ve said all along: The who is important, but the why and the how are also important. You will be left with a question to answer, but you will also be on the path to 100-percent discovery. It’s a huge reveal, and it’s done in a way that’s just so beautiful.”

King admits that some fans are “starting to guess right,” which was part of her plan all along. “As we get closer to the end,” she explains, “more fans are connecting the dots, which we hope they do.”

Speaking of getting closer to the end, King says this finale will set the liars on a path towards a new chapter — the final chapter — of their journey.

“This finale is the beginning of the end of the story we started to tell so long ago,” King says. “Within the next 11 episodes, there will be absolute completion to this story, but we’re going to save what direction we’re going in until after we tell you how this story ends.”

(Editor’s guess: Midway through Season 6 would be the perfect time for that long-rumored time jump to get the girls through college, wouldn’t you agree?)

We’ll have more finale scoop coming your way Tuesday morning, but for now, drop a comment with your thoughts and theories: Who is “Big ‘A'”?