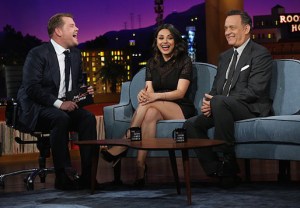 “I know what you’re thinking: Oh look, Andy Richter’s got his own show!” giggled James Corden, kicking off his stint as host of The Late Late Show in utterly self-deprecating fashion.

And throughout his mild-mannered opening monologue, the British comic repeatedly referenced his surprise at being chosen to succeed Craig Ferguson in CBS’ 12:37/11:37c weeknight slot and his belief that most Americans have no idea who he is.

If I’m being honest, though, I wish Corden — who’ll always be Gavin & Stacey‘s “Smiffy” to me — had made his intro more about his undeniable comedic chops and less about his gratitude (since only one of ’em is gonna result in repeat viewership).

Thankfully, he quickly transitioned to a star-studded pre-taped bit — which painted CBS’ search for a host as a Willy Wonka-esque contest to find a Golden Ticket — that earned more laughs than any other portion of the one-hour telecast. There was Joel McHale, weeping in disappointment at losing the gig. There was Girls‘ Lena Dunham, grumbling “this is misogyny” after coming up empty-handed. There was Katie Couric, hurling her chocolate bar across the room and shattering glass in the process. We also saw Chris Rock, Billy Crystal, George Lopez and more A-listers in the hunt. Finally (in a winking meta moment), erstwhile rumored front-runner for the CBS gig Chelsea Handler was shown buying a candy bar at a newsstand, then distractedly dropping it — with Corden as the lucky beneficiary.

And who should be the Wonka entrusted with Corden’s training? None other than brutal, Whiplash-inspired taskmaster Jay Leno, who brought along Allison Janney, Shia LeBeouf (scoring the biggest laugh while poking fun at his own pretensions), Arnold Schwarzenegger and even Meryl Streep to get Corden ready for his debut.

Lucky for Corden, the Wonka success aired well before his other high-concept bit — in which he and Tom Hanks burned through a rapid-fire, green-screen-enhanced reenactment of more than two dozen of the Oscar-winning actor’s movies. It was hard not to admire the ambition of such an undertaking, but aside from Corden’s disembodied head bobbing through a Cast Away interlude, the end product was too rushed and too lacking in clever twists to induce more than mild amusement.

Corden’s initial interview — a joint sit-down with Hanks and Mila Kunis — wasn’t without its awkward moments, either, especially when Corden began commiserating with Kunis about them both being parents of five-month-olds. As Kunis explained how she and beau (or possibly husband?) Ashton Kutcher have a weekly date night where they try not to talk about their baby, Corden blurted, “It’s almost impossible once you have a child, to the point where you might even be talking about it during sex. ‘You know she almost rolled over today.’ ‘Really?'” As Corden lightly mimed intercourse and Hanks looked on in comic horror, Kunis gamely tried to help the host out of his awkward spot — admitting that perhaps she’s had sexy moments where she’s been distracted wondering if her infant is making noises in the other room. “It’s [Ashton] and he’s just crying during sex — that’s what he does!” Corden lobbed back, hitting the dead horse with shock paddles. (Pro tip for Night 2: If you’re laughing harder than your audience, move on to the next subject, buddy.)

Overall, though, Corden came off as charming and unexpectedly earnest for a late-night host — tearing up when thanking his parents in the audience, and again looking a tad misty-eyed during a silly little “thank you” ballad with which he closed the show. Whether Corden ultimately excels at celebrity Q&As and current-events punch lines — or if Leno’s zinger, “in three months, this show will be mine” proves prescient — only time will tell.

Until then, it’s your turn. What did you think of Corden’s maiden Late Late voyage? Will you be back for a second helping later in the week? Grade his premiere in our poll below, then expand on your thoughts in the comments!