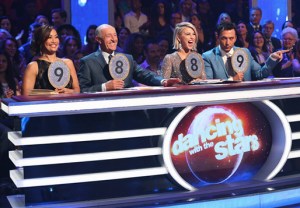 Following a season premiere that left much to be desired from the celebs on the dance floor, Week 2 found even the lowest-scoring couples making an excellent case for why they should walk away with this year’s Mirrorball trophy.

Charlotte McKinney, for example, displayed impressive precision on her cha-cha with Keo Motsepe (while also reminding us that cyberbullying is not cool); Redfoo, shocked by his last-place standing on the judges’ scoreboard, brought technical skill and high energy to his jive; and Patti LaBelle overcame an injured knee to salsa her way through a 50 Cent song (in style, might I add).

Still, not even a strong Week 2 showing would be enough to save one couple from elimination. Before we recap Monday’s results, let’s briefly hit the performance highlights — some of which will come as no surprise:

DANCE OF THE NIGHT | Rumer Willis and pro Val Chmerkovskiy (Cha-Cha) — Sure, Rumer and Val didn’t numerically score as high as the duo earning runner-up kudos in the paragraph below. But more than technical proficiency — which she’s got in spades — Rumer has demonstrated a commitment to perfection (“Do you need to take a break?” she countered in rehearsal, after Val suggested they take a short recess) and a natural ability to fully embody the mood of her performances. Rumer was all attitude on the dance floor — an integral part of the cha-cha — which puts her and Val just a hair above…

RUNNER-UP FOR DANCE OF THE NIGHT | …Nastia Liukin and pro Derek Hough (Rumba) — Conversely, Nastia possesses an inherent ease as she moves, and the pressure to be perfect obviously doesn’t faze her. (See: the 2008 Beijing Olympics.) But even after Nastia and Derek’s rehearsal video harped on the gymnast’s struggle to get “in character,” Nastia was nothing but smiles during her performance, which lacked the necessary intensity between her and her partner.

MOST OVERPRAISED | Willow Shields and Mark Ballas (Argentine Tango) — Hear me out: There’s no doubt that Willow places high on the list of Season 20’s strongest contenders. Not to mention, the Argentine Tango requires a passion and sexiness that the 14-year-old was, surprisingly, able to bring to her routine. Still, even as the judges watched instant replays of Willow and Mark’s performance, they failed to acknowledge how closely Willow kept her legs pinned to her body while executing those all-important kicks — a lack of criticism which will ultimately do the young competitor a major disservice.

WORST OF THE NIGHT | Chris Soules and pro Witney Carson (Cha-Cha) — In rehearsals, as Chris struggled to keep up with Witney’s choreography, the pro admitted she was “this close” to changing the dance moves altogether. Whether or not Witney ultimately decided to tweak the original routine, it was clear that Chris had a difficult time with relatively simple steps, leaving his partner to do most of the legwork (pun not intended, I swear!).

And, without further ado, here are the results, based on last week’s judges’ scoreboard and the home audience’s votes:

“I’m just happy that I got the chance to dance,” the LMFAO alum said of his elimination. “I did my best, I think Emma is the best, and I wanted to be there for her.”

OK, your turn. Did Redfoo and Emma deserve to go home? Which pair will get your vote after tonight’s performances? Hit the comments with your thoughts!