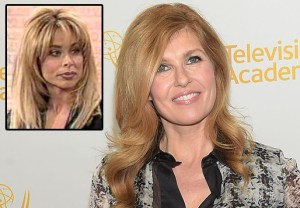 Murphy, who worked with Britton on the first season of his other FX anthology series, American Horror Story, announced the news on Twitter.

Resnick penned a controversial memoir about her friendship with Nicole that temporarily halted the trial. In the book, Nicole Brown Simpson: The Private Diary of a Life Interrupted, she expressed her belief that her friend was murdered by her hubby O.J. Simpson. Her most recent claim to fame was a recurring role on Real Housewives of Beverly Hills.

The 10-episode Crime Story will focus on the murder trial of NFL star Simpson, who was accused and ultimately acquitted of killing his wife. The cast includes Cuba Gooding Jr. (as O.J.), Sarah Paulson (as Marcia Clark), Courtney B. Vance (as Johnnie Cochran), John Travolta (as Robert Shapiro) and David Schwimmer (as Robert Kardashian).