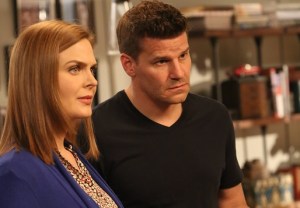 Since Bones‘ Booth has had trouble with a gambling addiction in the past, he should know better than to bet against Brennan, his Queen of Hearts.

But when the G-man falls back into his old habit during the show’s spring run (kicking off this Thursday at 8/7c on Fox) — and lies about it! — not even the impending arrival of the couple’s second child will be able to keep their marriage on safe ground.

“They don’t know what their future is, if it’s together or apart,” star Emily Deschanel reveals. “It’s a big issue.”

Meanwhile, Brennan’s more “emotional” second pregnancy will find her questioning her job and whether bringing another baby into their crazy, murder-filled world is the right thing to do.

Sounds like a great time for one of the Jeffersonian’s most infamous foes to resurface, yes?

“Pelant, in some way, comes back from beyond the grave,” the actress teases. “Pelant plays a part, I should say, in the season finale.”

Below, Deschanel also looks ahead at Season 11 (and beyond) and reveals why we haven’t seen much of Booth’s son, Parker.

TVLINE | Is the second pregnancy planned or a happy accident for Brennan and Booth?
That’s not really addressed, but they’re happy about it. They don’t talk about it beforehand like they’re trying to get pregnant and then it happens. I feel like it’s maybe half-and-half. They kind of talked about it, but they weren’t planning planning.

TVLINE | It is a natural thing for them to want to expand their family.
I think so. But it comes with a price. Once the reality of being pregnant sets in, which she fights with for a while, it’s an emotional thing. The first pregnancy, she’s oblivious to bringing another human being into the world and what that means. [Laughs] This time around, she knows what she’s doing and what — I don’t want to say repercussions — but what the meaning of that is, bringing someone into the world and their world, specifically, because they do dangerous jobs. They put their child in danger. Their house was blown up last season. It’s not a safe world that they’re bringing this child into, and she’s very much aware of that this time, whereas last time she was a little naive about it. It brings up a lot of issues and all the concerns she has with her own childhood and what that was like. It’s definitely an emotional journey. Then there’s also issues with Booth where he starts gambling again. That’s a big problem, too.

TVLINE | What’s the reason for Booth and Brennan keeping the pregnancy, initially, a secret from the team?
I think that’s just like what you do when you’re pregnant early on. I certainly kept my pregnancy a secret until it’s time to tell people. ‘Cause you have a greater risk for miscarriage and things like that until a certain point. I think they wanted to keep that just to themselves for that reason. Like most people, you wait until a certain time until you tell people.

TVLINE | Might they be reconsidering their careers? Like you said, it is such a dangerous job.
Yeah. You don’t see them like applying for other jobs. [Laughs] It’s clearly on Brennan’s mind, for sure, and Booth’s probably, as well, but I just want to speak for Brennan. Other characters are also reconsidering their jobs. It’s only natural when you’re expanding your family and your job has put all your lives in danger. Is it all worth it? You start questioning all that. She’s a physical anthropologist. She’s also a cultural anthropologist. She’s had experiences on archaeological digs, as well as studying different cultures. These are all… jobs that would put her and her family less in danger that she certainly would be considering at this time.

TVLINE | Does Brennan pick up on the fact that Booth’s gambling problem has resurfaced right away?
Eventually, yeah. And then there’s a big blowout about it.

TVLINE | What drives his relapse?
Somebody’s found dead, and they were a big poker player, so he goes undercover doing that. Both Brennan and Aubrey are nervous about him doing that, and Booth assures them that he’s going to be OK, but he’s human and he’s a recovered addict. He shouldn’t have put himself in that position. But the real problem for Brennan is, she talks to him point-blank about these things, and he lies to her. That’s a big issue.

TVLINE | So he doesn’t turn to her for help and tries to manage the situation himself instead?
Yeah. She confronts him before he can talk to her about it, and he’s denying it. That’s a problem. Then he works on himself and tries to get help. We’ll see how they do towards the end of the season! I haven’t read the season finale yet. [Laughs]

TVLINE | There’s a new serial killer coming up. How does that affect the team?
We think we get the person, and then we start doubting ourselves whether we have the right person. We have to discover that while someone’s on Death Row for the murders. But it’s not a serial killer like Pelant where we are necessarily in danger in that way. 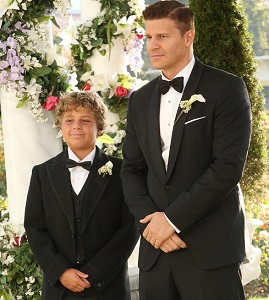 TVLINE | Fans are always missing and asking if we’ll see Parker again.
Oh, yeah. I know. Parker is studying in England or whatever. [Laughs]

TVLINE | He’s going to be one very well-educated child.
Yes, very well-educated. [Laughs] I can’t speak on that really. We have one child who’s getting older and I think it’s hard enough working with one child. [Laughs] Having two kids on set and writing for that and planning the hours and all that, I think they’ve simplified things in that way. But I’m sure Parker will come back at some point.

TVLINE | As you approach the end of the season, how do you feel about what the prospects are for Season 11? Are you energized by where the show could go?
Yeah. I feel like we still have stories to tell. We’re still going strong. I would like to see where we take it. I think there’s a strong possibility of a Season 11. We have not been picked up officially. There’s a lot of factors that they’re trying to figure out. But I think everyone’s interested in continuing to tell the story. I don’t know how much longer after Season 11 it would go, but it’d be nice to explore it for at least one more year.