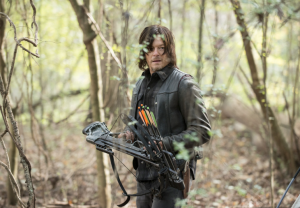 In the fifth season’s penultimate episode, The Walking Dead delivered Glenn and Nicholas’ inevitable his-word-against-mine accounts of Aiden and Noah’s demises, a major shift of allegiances and the Rick/Pete showdown that we all knew was coming. But was the confrontation the fight to the death that Carol foretold? Read on and find out!

LIAR, LIAR | As “Try” began, the Monroes mourned Aiden by listening to Nine Inch Nails’ “Somewhat Damaged” from the deceased’s “Run Mix” CD. (At least the late d-bag had good taste in music.) Hearing a knock at the door, Deanna found a casserole that Carol had made them (ignored) and a note saying that the newcomers were sorry for the family’s loss (burned). After the commercial break, we flashed to Glenn and Nicholas’ conflicting stories of what went down on the run. As expected, Nicholas painted himself and Aiden as heroes and threw Glenn under the bus. “These people have to go,” Nicholas told Deanna. “They are not like us.” When Rick told Glenn that the Alexandrians’ rules didn’t apply to them, the latter replied that they now WERE Alexandrians and had to make their new living situation work. Later, Glenn informed Nicholas that no longer would the coward be going on runs. “Are you threatening me?” Nicholas asked. “No,” Glenn replied, “I’m saving you.” Ungrateful jerkface that he is, Nicholas then went and dug up the gun that Rick hid before arriving in Alexandria (which, you’ll recall, went missing). That can’t be a good omen.

LOSING IT? | While she and Michonne fretted over Sasha more or less taking up residence in the watchtower, Rosita noted that she had been screwed up after Eugene admitted that he’d lied about D.C. because she felt like she’d lost something. But since discovering Alexandria, “you seem screwed up because we found something.” Michonne explained that she was upset about Noah’s death and the fact that “I feel like I was asleep in [Alexandria].” Still, she obviously wanted to make it her home on some level: As Rosita observed, Michonne hadn’t brought her sword with her into the woods. When the duo found Sasha hunting walkers in the woods, much to her chagrin, they joined her in taking out a small pack. (Notably, Michonne recalled all the horrific slaying she’d had to do before reaching Alexandria.) Afterward, Sasha revealed that she wasn’t only haunted by Bob and Tyreese. “Noah,” she said. “I told him he wouldn’t make it.”

LIFE SWAP | After Carol revealed to Rick details of Pete’s abuse that Sam had disclosed to her, the constable was discovered outside the Anderson home by the wife-beater himself. Trying hard not to put a bullet in the creep’s head right then and there, Rick ordered him – in most scary fashion – to “keep walking.” The next day, when Deanna balked at the idea of separating Jessie and Pete, Rick suggested killing him. “That sort of thinking doesn’t belong here,” she insisted. Her “better” idea? Exile him. Later, Rick approached Jessie, not only revealing what he knew but offering protection. “Would you do this for someone else?” she asked. When he answered no, she accepted his offer. Just then, Pete walked in. When Jessie stood up to him and told him to leave, he flew into a rage and attacked Rick. Faster than you could start a schoolyard chant of “Fight! Fight!” they were beating each other up in the town square in front of an audience of… well, everybody. When Deanna finally broke up the brawl, Rick pulled his gun and tried to pull off a coup. “Your way of doing things is done,” he said. But before he could finish his rant, Michonne – wearing her constable uniform – cold cocked him.

BUT WAIT, THERE’S MORE | Following Enid again, Carl got busted by the girl. “You’re very loud,” she noted. And for a few sweet moments, they ran around like kids who weren’t likely to bump into a walker around every tree. When eventually they did bump into not just one but a bunch of them – I mean, they HAD to, right? – they hid in a hollowed-out tree and came thisclose to kissing.

On their recruiting mission, Aaron and Daryl found a walker with a W carved into its forehead tied to a tree and a bunch of walker limbs. “Whoever did this,” Daryl surmised, “took what was left with them.” Like the chopped-up walkers outside Shirewilt Estates? Hmm.

And finally, Rosita reported that Tara was in stable condition. Thanks for asking.