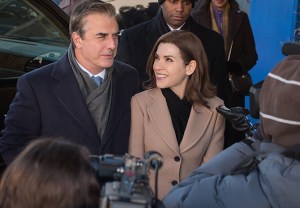 Alicia Florrick loses, then wins, then loses again in this week’s episode of The Good Wife — though only one of those outcomes pertains to her run for State’s Attorney.

Then again, the way showrunners Robert and Michelle King keep twisting the narrative in Season 6 — and playing with our protagonist’s drifting desires (i.e. “the thing is, losing is actually a relief”) — the results may, in fact, be too early to call.

Heck, when Diane Lockhart is gunning down Bambi’s mother and sharing cocktails with call girls — and loving it! — all bets are off, right?

(Side Note No. 1: Am I the only one who finds the sound of gunfire on The Good Wife absolutely bone-chilling ever since Will’s death? All the “boom!” “boom!” “pow!” this week could not have been coincidental, methinks.)

(Side Note No. 2: Where the heck were Grace and, yes, Zach spending Election Day?)

Those questions asked, let’s roll tape and review exactly where Alicia stands at the end of “Red Meat” (an installment that takes place over the course of Election Day):

FLORRICK VS. PRADY | Alicia kicks off the hour up five points in the polls, but a super-tense car ride with Peter throws a crimp in what’s supposed to be a facile win. When he brings up her recent public criticism of his tenure as State’s Attorney, she tells him it’s not personal. “So you don’t personally think I’m a racist, but saw political advantage in calling me a racist?” he seethes. Alicia, though, is deeply unapologetic, and snaps back with a retort that stings even harder:  “Let’s just get through this, then we can get back to you using me politically.”

It’s not the final blow, though. Peter subsequently gives a TV interview suggesting Alicia’s got the race completely wrapped up, which sets off alarm bells among Alicia’s campaign team that such a message will lead to low voter turnout — especially in the suburban districts where her support is strongest — and hand Prady the win. Things go from bad to worse when Alicia tracks her hubby down and offers up her theory that he wants to be “the only winner in the family” — and then uses the example of him “banging Ramona” as further proof that he’s never truly been supportive of her campaign. (In Alicia’s defense, Peter did know what he was doing with his public comment, no matter how strenuously he protests.)

Josh and Johnny spend the day scrambling in a panic — there’s a very funny interlude where they wind up trying to get The West Wing‘s Melissa Fitzgerald to record a last-minute robo-call pertaining to a parking-meter privatization initiative — while Marissa keeps Alicia mostly occupied playing Halo (more on the video game in a minute).

But it turns out to be a last-minute chastisement from Eli — noting a loss for Alicia would be an embarrassment for the governor — that spurs Peter to schedule a last-minute speech downtown, one that causes major gridlock that Johnny and Josh are pretty sure will discourage voting downtown, too (where Prady is strongest).

In the end, Alicia pulls off the win, and even offers Prady a spot as her No. 2 — which he promptly declines. And despite her occasional distaste over how her campaign has played out, she’s practically glowing from within at her victory party. What’s that old saying about winning being the best medicine? Or is that chestnut about laughter? I forget.

THE KALINDA FILES | It’s clear, though, that just because Alicia’s won the race doesn’t mean her days of compromise are over. She abruptly hangs up on an Election Day call from her secret PAC benefactor Lemond Bishop, prompting him to go to Kalinda and explain that if Alicia wins, Kalinda will need to serve as “the go-between” from himself to the State’s Attorney’s office. (A tall order, considering the two women are never in the same room, no?)

Kalinda’s day goes from bad to worse, though, when she once again spies an SUV following her while she drives Bishop’s son to school. This time, though, the vehicle gets apprehended by Team Bishop — and she sees his goons drag away the men in the suspicious vehicle. The incident leads to Dylan’s expulsion from the school — and an epiphany for Chicago’s top drug dealer: “My life is strangling any chance of [Dylan] living his.” Bishop is so shaken, he tells Kalinda he’s decided to go straight — but he needs to be sure that his loss of power won’t lead to his prosecution (a common theme for ex-drug dealers, he says) and wants Kalinda to get Alicia’s assurances to that end.

And then he adds a little kicker that means something very different to Kalinda than it does to him: The dudes in the SUV turned out to be investigators for ASA Geneva Pine — and they were following Kalinda, not stalking young Dylan. Bishop seems to think Geneva’s mission is still about him on some level, but Kalinda’s look of pure dread — and the knowledge she got Cary freed on falsified metadata — tells us it’s probably otherwise.

WHEN WILL ALICIA BE LOVED? | As Alicia triumphs at the polls, she sees not one but two romantic possibilities slipping away from her. Despite Finn dropping off a gift of video game Halo on election morning — the better to relieve tension while she awaits the results — and despite him joining her remotely for some shoot-’em-up fun, he’s apparently backing away from providing a different kind of stress release (wink wink) for his long-time partner in flirtation. “I’m actually seeing somebody,” he tells Alicia when she invites him out to dinner. And while he quickly qualifies the news by saying it hasn’t been going on long — and even offers to cancel with the new woman — it’s a definite setback for a couple that’s never done more than grazing hands on a couch.

Johnny, meanwhile, looks a little clenched during Alicia’s big day — despite (or maybe because of) the fact that he and his candidate pulled the voting lever (so to speak) the day prior. Alicia asks if they’re OK in the wake of their surrendering to a kiss (and probably more) at the end of last week’s episode, but he’s keeping the conversation mostly professional. And while he lights up when they make eye contact at her victory party, that glow is immediately switched off when Peter intercepts her for a photo op. “I’ve never been a guy to stay in one place,” Johnny tells Marissa before glumly making an escape via elevator — and apparently heading for that campaign in California. (Hrmmmm… maybe Eli didn’t block the hire after all?) 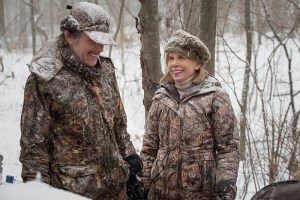 A’HUNTING SHE WILL GO | Christine Baranski reminds us why she’s an Emmy winner for comedy (back in 1995, for Cybill) when she accompanies her hubby on a hunting trip to Wyoming surrounded by the richest Republicans in the nation. “I might start soliciting for the ACLU — your wife is unpredictable that way,” giggles the liberal lawyer to her very conservative hubby. Then, later, she adds, “If I were to set off a bomb in this room, we’d have Democratic presidents for the next 30 years.”

Diane turns super serious, though, when she spies a tech billionaire who’s reportedly dropped his legal team — and her hunting trip begins in earnest to replace the lost Chum Hum business. That goes south when she mistakes his callgirl as his wife, but she winds up sparring-bonding out in the snowy woods with a pro-life advocate named R.D. (Oliver Platt). Their conversation is heated (“Don’t look away from the aborted fetus,” he pleads) but never below the belt, and it turns out he’s a billionaire, too — one who might just want to hire Diane even though she promises him the firm will never argue an anti-choice (or a pro-life) case.

Oh, did I mention not only does Diane bag a doe — but she finds, somewhat to her chagrin, that she actually enjoyed the kill. She winds up dining on the animal she killed — but I don’t really think there was anything symbolic about it. Sometimes, rare venison is just rare venison.

What did you think of this week’s Good Wife? Are you happy Alicia won? Are you bummed that she suffered romantic setbacks on two fronts? And what do you make of Diane’s latest arc? Sound off below!