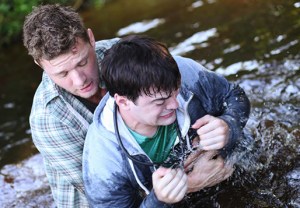 Of all the questions that have been born from Secrets and Lies‘ central murder mystery, here is the one that lingers in my mind the most: “Why isn’t anyone else doing anything?”

Sure, The Ice Queen Formerly Known as Detective Cornell dabbled in investigative work when Tom’s body was first found. But in the weeks since the boy’s death, the only people that seem consistently interested in new developments are the reporters outside Ben’s house (who, at this point, could seriously benefit from a good night’s sleep).

And because there’s been a general sense of apathy in Charlotte, North Carolina, Ben is once again forced to pursue a suspicious lead all by himself in this week’s installment. Let’s recap what went down in the eventful hour:

THE SUSPECT | With Ben’s Flowers in the Attic-loving neighbors driven out of town by his murderous accusations, and Jess’ ex-husband no longer in the picture, the circle of suspicious folks in Ben’s radius has gotten much smaller. But when Ben finds autistic boy Matt Daly walking near the woods on the edge of town — suspiciously alone for the first time since the series began — Ben runs after the teenager, who he notices is carrying a blood-stained blue jacket, a piece of evidence that Ben knows Detective Cornell has been trying to track down. After returning Matt to his mom (who mysteriously has a split lip), Ben returns to the woods to retrieve the blue jacket… only to discover that it’s gone.

Ben later encounters Tyler, Matt’s bad-boy older brother who is home from school for the holidays. Through the grapevine, Ben discovers that Tyler is a recovering drug addict — and, taking into account the scratches on Tyler’s knuckles, his addiction would not only explain Lisa Daly’s bruised face, but possibly Tom’s death. 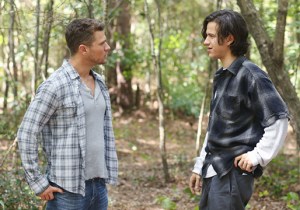 But, of course, it’s never that simple for Ben, who quickly leaves Harmless, Concerned Neighbor territory and enters Overbearing, Privacy-Invading Neighbor territory. On his third visit to Lisa’s house, Ben barges into Matt’s room and shuffles through the clothing on his floor, hoping to find the missing blue jacket. It’s then that he discovers Matt is the temperamental Daly son, not Tyler, and he’s to blame for Lisa’s injury, as well as the ruined house that now sports smashed mirrors and broken banister uprights. Lisa explains that the media attention surrounding Tom’s death is causing Matt to lash out, while Tyler explains why he’s really home for the holidays: He’s hiding from the cops after he took out a row of mailboxes while driving drunk. (He ultimately turns himself in, though, and gets nothing more than house arrest and community service. Which hopefully includes fixing those mailboxes, right?)

And although Matt’s violent streak keeps him on the top of Ben’s suspect list, Detective Cornell soon squashes that theory: Not only does Matt hate rain (which was pouring down steadily on the night of Tom’s murder), but the boy’s GPS bracelet locates him at home, asleep, at the time of Tom’s death — and it’s back to the drawing board for good ol’ Ben Crawford.

THE THREAT | Interestingly enough, there is a moment in Sunday’s episode where Detective Cornell is actually on Ben’s side for once. Shortly after Christy’s car is vandalized with the word “Guilty” written across its door in paint cleaner (a crime later attributed to Natalie’s fling, Cooper), Ben receives a much more professional-looking threat: Not only has someone broken into his garage and arranged a number of black flashlights — aka Tom’s murder weapon — in a pattern on the floor, but the mystery man or woman has hacked into Ben’s phone and sent an untraceable text to Detective Cornell. For the first time in weeks, Cornell seems legitimately concerned about Ben’s safety, telling him he must watch his back from now on.

But Ben’s stalker has much more calculated ways of putting him in danger: The next night, when Ben is prepared to leave a parking garage, he receives an anonymous text that reads, “You will pay for your sins.” Then, in a scene that you’d probably expect to find on CBS’ Stalker rather than this show, the mysterious attacker remotely shuts off Ben’s car… and locks him inside.

Other highlights from Sunday’s hour:

* After Christy and Ben have extremely unsatisfying morning sex (she initiates a steamy make-out sesh before suddenly crying, “I can’t!” and running into the bathroom), Christy spends the rest of the episode sharing a bit too much time with her latest real estate client, Sam. When Ben confronts her about her feelings, she can only tell him, “A five-year-old is dead,” which sort of makes all healthy relationships impossible right now.

* On one of Ben’s visits to the police station, Detective Cornell is seen getting an earful from a distraught woman who screams, “You know what you did! You destroyed my husband! How do you sleep?!”

* After Abby smacked a boy at last week’s winter fair (for calling Ben a child killer, in fairness), she gets shut out from her favorite annual Christmas party. (And while I understand Abby’s sadness, I’m not sure I can forgive her willingness to dump an entire tray of cookies onto someone else’s driveway. What a waste! It’s no wonder Ben doesn’t want to take her for ice cream later that night.)

OK, your turn. What did you think of Secrets and Lies‘ newest episode? Hit the comments with your thoughts!