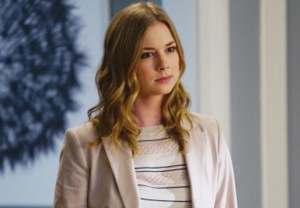 “I don’t want any more loss.” a breathy Emily sneered at Victoria halfway through Sunday’s Revenge. Unfortunately, Emily would soon be reminded that loss — much like David Clarke — is always lurking around the corner.

A sincere attempt at a truce with Margaux — Emily even brought her real birth certificate as a “peace offering” — ended in tragedy, as Margaux and her fuchsia pantsuit were side-swiped by a speeding taxi. (For those of you keeping score at home, that’s the second time a speeding car has attempted to murder a major character this season. This is why I always take the subway.)

Margaux lost her baby, as predicted, but even I was surprised by her next move: She told Victoria that Emily pushed her into the oncoming cab! As if any more fuel needed to be thrown onto that fire, Victoria is now determined to bring Emily to justice — as if she even knows the meaning of the word.

(LADY) JUSTICE IS SERVED | Emily managed to retrieve Jack’s original blood sample from the night he was arrested — it’s amazing what Margaux’s goon is willing to hand over when he’s got a gun pointed at his forehead — but the judge refused to admit it into evidence for fear of contamination. Even worse, Jack’s mom-torney reacted so poorly to this that the judge held her in contempt! But because Emily always has a Plan B up her sleeve, she worked with Nolan and Ben — whose proven himself to be quite useful during the past few weeks — to blackmail the judge into testing Jack’s sample. (Truth be told, it was the kind of nonsense plan that could only work on Revenge, down to the fake name Emily used during her ominous call to the judge. “Lady Justice”? All right, then.)

HE AIN’T HEAVY, HE’S MY (DEAD) BROTHER | Good news: Louise did not drag Lyman’s corpse from the beach to the bedroom as she suggested at the end of last week’s episode. Bad news: She confessed the (accidental) murder to Nolan, and on this show, we all know that the people with the most secrets inevitably finds themselves in the most danger. The only silver lining in this whole situation is that Lyman’s funeral would give us a chance to reunite with the incomparable Carolyn Hennesy as Mama Ellis. Oh, how I’ve missed her.

SOCIAL NETWORKING | But before Nolan winds up in a heap of inevitable danger, it appears a little romance is in the cards for Emily’s long-suffering BFF. The social worker in Jack’s custody case was so impressed by Nolan’s defense of his friend that he returned to the club later that night for an off-the-books follow-up session. He was deterred when he saw Nolan’s wedding ring, but Louise’s doting husband was quick to offer an explanation over a drink. (So not only is Nolan now an accomplice in Lyman’s murder cover-up, but he’s also blabbing the truth about his sham marriage to a cute social worker. Didn’t Nolan used to be… smart?)

Revenge fans, what’s your take on this week’s big twist(s)? And do you really think, as the promo suggests, that Emily will reveal her true identity to the world next week? Drop a comment with your thoughts and theories below.