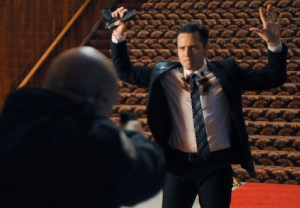 This Monday on Castle (ABC, 10/9c), Detective Kevin Ryan’s latest bid to bolster daughter Sarah Grace’s college fund with a second job takes a tragic twist, when an assassination attempt on a congressman he is guarding claims a victim.

TVLine invited Seamus Dever to preview Ryan’s predicament as well as an upcoming episode that will (finally!) revisit Rick’s vanishing. Plus: How is that Season 8 renewal looking?

TVLINE | It sounds like things go pretty sideways with Ryan’s latest moonlighting gig.
Yeah, things go a bit pear-shaped. [Laughs] Shots ring out, and Ryan is left to piece together what really happened and who is behind it, who is the false culprit and who is the real culprit. As you know on Castle, we go through three or four different possibilities.

TVLINE | When you say that Ryan has to piece it together, do you mean almost in real-time, there on the scene?
Sorta, yeah. We did this crazy thing that we almost never do on Castle — it seems simple, but flashbacks. I think we’ve only done one episode that deals with flashbacks — “47 Seconds,” in Season 4? Regardless, it’s been a while, so it was a bit of a departure for us. People might be wondering what the hell show they’re watching. But hopefully they go, “Oh yeah, I kinda like this Kevin Ryan.” Bill Roe, who’s now our longtime director but was our original director of photography, shot a really cool episode. The flashbacks are handled in way that has some nice style to it.

TVLINE | Why on earth, as seen in promos, are cops pointing their guns at poor Kevin?
[Sigh] Because we like to mislead the audience into thinking that Ryan is going to be arrested. [Laughs] He is not a person of interest, he is merely caught in a circumstance where he is waving a gun around a crowded ballroom — which maybe he shouldn’t have done! So, yeah. It’s simply a case of mistaken identity. But hopefully it gets people to tune in, to find out, “What’s wrong with Kevin Ryan?!”

TVLINE | We’re meeting one of Ryan’s sisters, Gwen (played by Awkward‘s Heather Mazur), and her husband Frank (Ghost Whisperer‘s David Conrad) in this episode. How would you describe his relationship with each of them?
It’s his older sister, so that certainly spoke to me, having an older sister in my life. There’s a love there, but there’s a lot of arguing that has to happen to get to that love — and that certainly was the case for Ryan and his sister, when things start to point towards his family. It becomes one of those things where loyalties are questioned. Heather Mazur is a wonderful actress 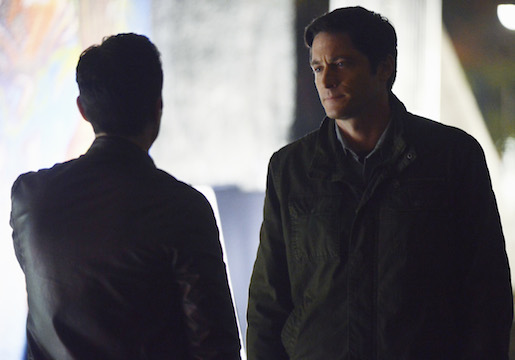 who I met at Carnegie Melon, so I’ve known her for, I dunno, 18 years now? And David Conrad I’ve known for eight years now, because I guested on Ghost Whisperer. I’ve always looked up to David as an actor, so it all just fit like a glove — he was in town for pilot season, he was available, and he’s someone that my character is supposed to look up to as well. We got to take a lot of the acting out of it, which was very cool.

TVLINE | So Kevin and Frank get on OK? There’s a bit of a bromance there?
Perhaps a little bit, yeah. The way we played it was Frank was a former cop and he shows Kevin that [private security] is a way out of having your wife nervous about your safety on a daily basis, yet still getting to use the skills you have — and probably for more money. So yeah, he looks up to Frank like, “This could be my future.” Frank even offers him a job, so Ryan’s left to decide, “Am I going to be a cop the rest of my life or not?”

TVLINE | Do we learn anything new about Kevin this episode?
We’re going to learn something about his personality, certainly in the relationship with the brother-in-law and what it’s like when Ryan feels betrayed. There’s certainly that element, and we’ve never had that with Ryan. And we’re going to learn about his family a bit. He’s talked about having two sisters for years — I think we mentioned it in the Season 2 Alyssa Milano episode? — and yet we’ve never met them, not even at his wedding!

TVLINE | We’re heading into the home stretch of Season 7. Any other upcoming episodes to tease?
There is, of course, the one that everyone has been hanging on, waiting for, since the beginning of this season — “What happened to Castle? Where did he go for those three months?” That’s going to be exciting to get back into [in Episode 20], because what’s cool about that is Espo has always been in the camp of “I don’t believe his story,” while Ryan always been [more open-minded]. It’s fun to play that balance of, “Oh my God, is he lying? Is it the truth? How could he do this to us?” Or believing him.

TVLINE | Does that episode revisit the mystery significantly, or merely brush up against it in the course of something else?
Oh no, it gets into it significantly. And as all Castle episodes do, it offers a little bit of finality and then leaves the door open for what’s next. We were just doing [DVD] commentary for Episode 1, and David [Amann] was in the middle of writing 20, so it was hilarious 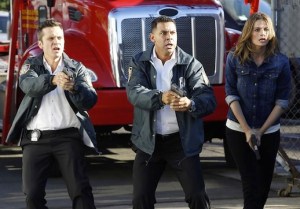 because we were talking about where the mythology was going, knowing that the audience won’t hear this commentary until September. [Laughs]

TVLINE | Lastly, what’s the confidence level over there as far as Season 8?
Well, you know, our numbers are strong, though we’ve always had the older demo. We’ve never had the sexy 18-34 demo. I look at shows like Empire and I’m like, “Oh my God, is that even possible nowadays?!” It’s just amazing. So I’m very happy for all my friends that work over there, but we’ve never had that crazy, sexy demo. I think we’re hovering at like a 1.6, 1.7 [in the 18-49 demo]… 1.5 the other day… but we’ve always had strong overall numbers. So as far I’ve heard, there’s no indication that we’re going to go anywhere; it’s just a matter of getting everybody at the table and finding out. [Nathan Fillion and Stana Katic, as well as other original cast members, have yet to sign new contracts.] Nobody’s talked to me about [re-signing for] Season 8, so that’s where I’m standing. And I’d like some answers, because my mother-in-law is very concerned that I’m going to have to get a teaching job. [Laughs] It’d be nice to get some answers soon.