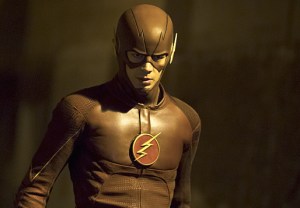 Barry Allen may want to time-travel to back when his biggest concern was getting blood spatter on his Chuck Taylors, based on how The Flash‘s final episodes are shaping up.

For one, shape-shifting actor Doug Jones — who will make his debut as the DC Comics baddie Deathbolt in an April episode of CW sister series Arrow — revealed on Twitter that his character will also be appearing on The Flash‘s penultimate episode:

But even more curious, Jones’ tweet disclosed the title for that episode — “Rogue Air.” And for a show that already has introduced Captain Cold, Heat Wave, Weather Wizard, Pied Piper, Grodd and Girder, among others — with more such as The Trickster and Glider yet to come — it’s not hard to make the leap that Barry may have ahead of him a long night of “speed-dating” multiple menaces.

“We’re going to do something with all the Rogues. I can’t promise it’s going to be this season,” showrunner Andrew Kreisberg recently shared. “We know that if the original [1990s] Flash series had gotten a second season, both John [Wesley Shipp] and Mark [Hamill] have told us that the first episode was going to be a giant Rogues episode. And that sounds like maybe a good thing for us to do, what they didn’t get the opportunity to do.”

Do you think maybe Kreisberg & Co. decided to (ahem) fast-track their plan for a massive Rogues round-up? (With reporting by Vlada Gelman)