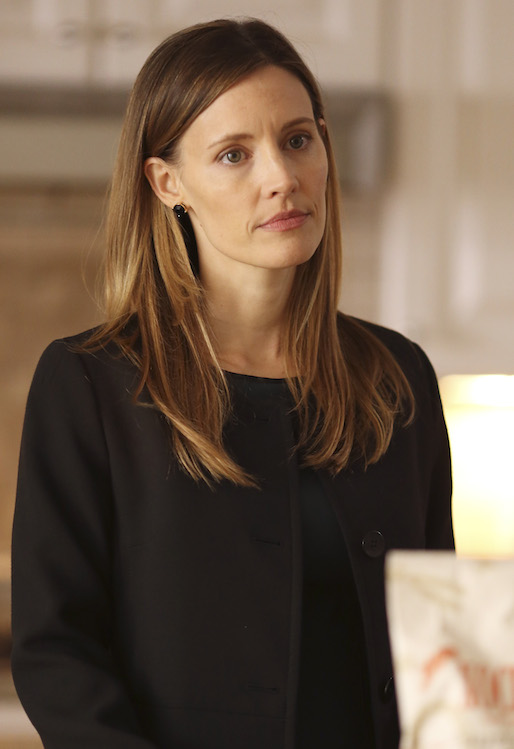 On ABC’s Secrets and Lies (Sunday, 9/8c), Private Practice alum KaDee Strickland plays Christy Crawford, a successful real estate agent whose marriage is on an ever-shaky foun- dation, especially since husband Ben (Ryan Phillippe) emerged as the prime suspect in the murder of a neighbor boy who turned out to be his son.

As Ben’s intrepid mission to clear his name only digs him in deeper and deeper, Christy’s stance as supportive spouse if increasingly tested. But maybe she has sordid secrets and lies of her own?

Strickland spoke with TVLine about the closed-ended murder mystery – including the measures being taken to keep the big reveal spoiler-proof – as well as the sexy/dangerous drama pilot she currently is filming.

TVLINE | Secrets and Lies is obviously some dark, intense material. And it has some not exactly likeable characters. What drew you in?
I’d never done a character like Christy Crawford, and I just thought the story was so compelling. I found it to be completely relatable from an audience standpoint, because it feels like such a normal neighborhood where this tragedy strikes. Of course when I signed on, I had no idea that it was going to become so interesting for the audience, but now, having completed it, knowing that it’s going to be resolved by the end… you can really get caught up in the story all over again, which has been really fun for me.

TVLINE | Ben and Christy’s marriage was already in a shaky place when we first met them. Will the root of their rift be revealed?
You are going to absolutely revisit a time and space where Ben and Christy took a turn, and you’ll learn in this week’s episode where Christy stands with everything.

TVLINE | Is the cause of that splintering anything predictable, or is there a unique twist on it?
Are rifts in marriages ever that predictable? [Laughs] There’s a lot going on. There’s a lot fueling the fire. You’re going to learn a lot about who Christy is, what her needs are, and where she’s at in this Sunday’s episode.

TVLINE | How would you 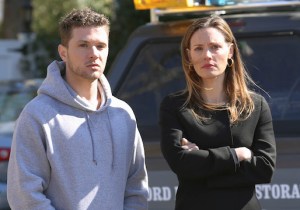 describe her relationship with Ben right now? Supportive? Privately hateful? Because they’ll, like, have it out, and the next thing you know she’s cradling her head on his shoulder on the couch.
They gave us a real opportunity, not just in the writing, but on the day when we were filming, to explore many different options. We were very encouraged on set to paint different pictures. I will often be a bit surprised to see who we’re communicating in this week’s episode, but I know the bones of what happens. Because I think it does run the gamut — and given the circumstances, that makes perfect sense. There’s no way you’re publicly humiliated like that and you feel great about it. There’s no way you ignore that he’s a wonderful, loving father, and cast him off. Maybe I want to throttle [Tommy’s mother] Jess, and maybe I want to throttle Ben, but by the same token you can’t deny when someone’s in that kind of deep pain and that kind of incredibly difficult situation. Every episode feels like something unimaginable.

TVLINE | I’m often like, “Ben can’t get out of his own way.” Like, “You know what? Don’t go for a run this morning. Nothing ever good seems to come out of you going for a run.”
“Perhaps you should take up cycling?”

TVLINE | Is it safe to say that Christy is keeping other secrets, as she did with Natalie’s pregnancy test?
Ab-so-lutely. Everybody’s got a multi-layered tier of secrets.

TVLINE | Will the nature of her conspicuous “Victoria’s Secret run” be revisited?
I mean, a gal always needs a good pair of undergarments….

TVLINE | That’s your story and you’re sticking to it?
Christy has a reason to feel like a woman right now. I’ll leave it at that. Christy has many reasons to need to revisit who she is and her powers and prowess as a woman.

TVLINE | Will we have the opportunity to learn something private about Christy, seeing as the conceit of this series is it’s all from Ben’s point of view? It’s tricky that way.
It is tricky that way, but the hope is that all of those underpinnings of a character get exposed on some level, and you will see Christy go through a lot of ebb and flow in the coming weeks. A lot happens. Trust me, a lot happens. You’re going to learn week to week something new about these people. And I really love the design of unveiling the neighbors, and who they all show up as.

TVLINE | Are the people who’ve seen the original Australian version not necessarily spoiled for the ABC series?
Absolutely, absolutely. We have four more episodes [to air], and I don’t know who did it. We shot alternate endings, so it’s definitely something I’m excited to find out as well. For an actor, it was a lot of fun to be caught up in the same web that the audience is finding themselves in, because I won’t know [who the killer is] until the final episode airs.

TVLINE | So come the finale night, KaDee doesn’t necessarily knew who did it?
That’s right. I know some things that happen that lead up to an answer, but I don’t know what the answer is. 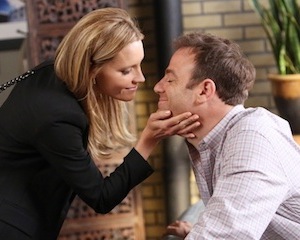 wrapped, have there been any opportunities for you to pop up on Scandal or cross over to Grey’s? Or did you purposely want to have a bit more distance from the last time you played Charlotte?
No, that’s not been asked of me. That’s something that is beyond my control, but I love, love, love, love the land of Shondaland. I love that all my wonderful cohorts have been a part of it, and I absolutely would be open to anything Shonda asked of me.

TVLINE | Have you by chance seen what Paul [Adelstein] is up to on Scandal?
I’m not 100-percent caught up, but I certainly know that Paul has carved out yet another awesome, indelible Shondaland character. I was just talking with him the other day, and I’m so proud of him. I’m so proud that all of the aspects of his talent are getting utilized right now, because he’s such an incredible talent. Paul is like nobody else I’ve worked with, and I adore him.

TVLINE | Lastly, how would you compare the character you’re playing in CBS’ Doubt pilot to Charlotte and Christy? [Strickland stars as a defense lawyer who gets romantically involved with a client who may or may not be guilty of a brutal crime.]
You know, she’s crackerjack smart, though the other two women definitely have a real savvy and a survival and an intelligence. And all of them have unpredictable love lives….

TVLINE | Your Doubt character is wrapped up in a funky situation, right?
Honey, it’s great, and this cast is remarkable. I cannot tell you what it was like to walk into the first table read and, “Hey, there’s Bill Irwin, there’s Kathleen Chalfant, Elliott Gould, Dule Hill.” It’s incredible. Dreama [Walker], Laverne [Cox]…. This cast is truly exceptional, and we’re super-happy to get Teddy [Sears], who is such an interesting choice for this [male lead]. I can’t tell you too much about anything, but the whole thing is phenomenal. Shooting it in New York….