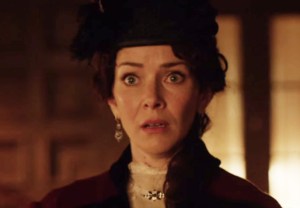 “She’s been trapped in this 1903 prison world for a very long time, so initially, there’s a little bit of shock,” Wersching tells TVLine. “And Damon has a lot of questions, which he asks not-so-nicely; he’s bringing a lot of resentment and sarcasm to the party to mask his pain … so you can tell right away that they’re mother and son.”

Below, Wersching takes us into the mind of Mama Salvatore — she even reals her ‘ship of choice — and discusses how Lily will shake things up in present-day Mystic Falls, including how her arrival might be the key to Stefan’s salvation.

TVLINE | You’re coming into a show in its sixth season with more than 120 episodes under its belt. Were you able to catch up before you started filming?
When I was first up for the role, I was blind, but when I got it, I started doing my homework a little bit. I watched four episodes before I actually started shooting, but now I’ve seen the first three seasons. I’ve been a good little binge-watcher; I’m also holed up in a hotel room in Atlanta, which is kind of a prime binge-watching scenario. 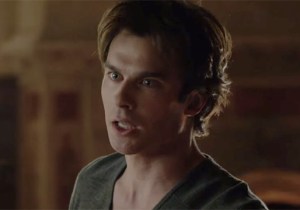 TVLINE | You’ve mostly played humans throughout your career. What was your approach to playing a vampire?
My approach, besides taking goofy pictures when I was getting my vampire teeth mold done, is exactly the same as it would be for any other character. One of my goals is to make sure that, even though we’re in this heightened world, I still make Lily as grounded and real as possible. On top of that, she just happens to be a vampire.

TVLINE | And not just a vampire, but a ripper. Will we see a change in Lily’s demure demeanor?
Yeah, and I think you can tell that even though she’s this prim-and-proper 19th century woman with her hat and her corset, there’s some stuff brimming under the surface. In these first encounters with Damon [tonight], he gives her a little attitude and she tries to stay nice and calm, but you can tell it might not take much for her to snap.

TVLINE | Elena, the only other woman Damon cares about, also meets Lily this week. What’s the vibe between them?
Yes, Lily is a potential mother-in-law, and she wants to meet her son’s girlfriend, but there’s so much else going on that they have to get through first — like, “So, you’re a vampire. And you’re alive!” There’s a lot to deal with before Lily and Elena go out shopping. [Laughs] Once Lily gets to come to present-day Mystic Falls, there are interactions between her and Elena that aren’t exactly as cookie-cutter as you’d expect [from a woman and her son’s girlfriend.]

TVLINE | Lily being from the 1800s, I imagine coming to the present day will freak her out a bit. Like, what are these cell phones?
Oh, absolutely! I think in [tonight’s] episode, she sees a computer for the first time and is just kind of like, “OK…” But I will say, she’s a Salvatore, so she does acclimate — in some regards — pretty quickly, like, “Well, look what I just Googled!” There’s a lot of social stuff in the modern world that takes her a little longer to acclimate to, like how women act and how they’re able to act. 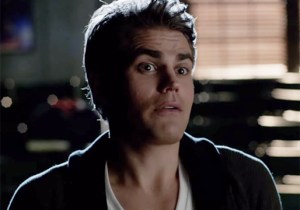 TVLINE | So much of the focus right now is on Damon and Lily, but Stefan is also her son. What’s that dynamic, and when will we see them interact?
I actually think I shot for quite a while before I even met Paul [Wesley], so most of her initial stuff is with Damon. It’s actually Damon’s plan to have mama be the thing to help Stefan out of his humanity-off phase. That doesn’t necessarily mean things go according to plan, but that’s the idea. … She tries her best to be what her sons want her to be, but she’s a very different woman now.

TVLINE | Since you went back and watched the earlier seasons, do you have a favorite couple on the show?
I’m assuming part of my bias is that I’m a mother, but I tend to first go to the Defan ship, the boys together as brothers. But as Lily, I feel like the writers and producers are perfectly manipulating me. I feel like I’ll be going in one direction, like, “Oh, Damon and Elena…” and then I’ll be like, “Oh, Stefan…”

Vampire Diaries fans, are you excited for the Salvatore family tree to (almost) be complete? Drop a comment with your thoughts below: How do you hope this all plays out?