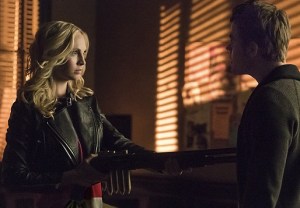 You can take the humanity out of the girl, but the control freak? Not so much — unless, of course, you’re Stefan Salvatore in Thursday’s Vampire Diaries.

Caroline may be a little different now, but, in one way, she’s still very much the same: she is determined to keep a normal routine and not attract unwanted attention. That means covering her tracks by cleaning up the damaged bar and trying out for the school musical. Unfortunately for her, Stefan ruins her (amazing) audition by killing the drama teacher. If you – like me – thought this storyline was going to bring the pair closer together, you would be very wrong, at least initially. There’s no kissing and Sid and Nancy exploits. Instead, Stefan wants revenge against Caroline for the inevitable disaster that awaits him after he regains his humanity.

“When I’m done with you, you’ll be drowning in mistakes,” he tells her, smearing the dead man’s blood on her lips. “This is me forcing you to let go. One day at a time. Until you break.”

It doesn’t help that Caroline’s idea of payback is dismantling his motorcycle. “You’re an embarrassment to humanity-free vampires everywhere,” he adds.

Stefan decides to teach her a lesson by igniting her bloodlust as they go to town on a co-ed – and then each other. So the would-be couple’s first time together isn’t exactly the most romantic moment, but it’s still incredibly steamy.

“You were right,” Caroline confesses. “Your way is much more fun.”

Meanwhile, Elena convinces Damon that his mother Lily is the emotional trigger they need to get the old mama’s boy Stefan back. They enlist Kai and Bonnie in getting over to the 1903 prison world, where Elena is super excited about meeting her boyfriend’s presumed-dead mom. Little does she know, Lily has a vampire dollhouse of decaying travel companions and she’d like to take them back to Mystic Falls. Despite his concerns that his mother is not only a ripper, but an insane one, Damon brings her home, promising they’ll get her vampire glass menagerie back. That seems like a false promise seeing as how she’s just a means to an end, as he tells Elena.

In other revenge-y plots – where is Emily Thorne when you need her? – Bonnie takes out her anger on Kai, stabbing him several times as he yells that he’s changed. “I know,” she replies. “So have I.” And how! Her final act of punishment: she leaves Kai behind in the prison world where Lily’s pals (presumably?) destroy him.

As for Enzo’s plot against Stefan, he’s suddenly lost interest in his game with Sarah Salvatore, just as she’s lost her memory of who she is.

And finally, remember that cure everyone was obsessed with a couple seasons ago? Bonnie brought it back from 1994 and she’s gifting it to Damon to do with as he pleases!

Vampire Diaries fans, who needs the cure most? Was Caroline and Stefan’s hookup worth the wait? And do you think Kai is dead? Hit the comments with your thoughts!