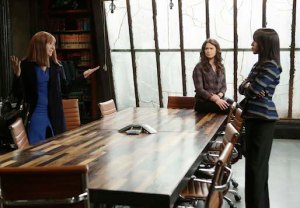 Is Scandal back to its classic self?

Whereas the previous episode took a significant step in that direction, this week’s hour seemed to complete the long-awaited round-trip, putting Olivia in full, nearly unfettered fixer mode. We had a provocative Case of the Week (an X-rated tell-all by “Kinky Sue,” played by Girls‘ Lena Dunham), and Quinn and Huck (mostly) acting like old-school, not-overly-angsty Gladiators.

Also, Olivia washed those men right out of her hair and got her groove back, and there was just the right dash of political machinations. (Reservations about Mellie’s POTUS-via-Senate run, I do have. But if anyone can pull it off, Lizzy gets my vote.)

It also did what Scandal almost invented, generating nicknames and phrases ripe for feeding the social media frenzy. (As I quickly warned people on twitter, albeit too late for myself: Do not Google “dustbuster +sex.”)

There was also a pair of Shondalogues that felt fresh, and kinda sneaked up on you. First, Sue flipped the script on Liv by condemning her for shaming her sexual proclivities. “When did you become so weak?” the Olivia Pope fan marveled. “You and Ruth Bader Gisnburg were all we got…. you gave other women a contact high….. I thought you’d be brave, fearless and sexy, but you’re a dried-up prude.” Delicious, on-point stuff, reminding us, as well, of who Olivia used to be.

The other orating came from Abby, who spelled out for Leo why this sex scandal would ding her a lot worse than him. She illustrated her point by telling of how every story that has been written about her, and despite all her accomplishments, mentions him. Because heaven forbid she isn’t seen as wanted by a man, the “property of Leo Bergen.” How the holder of the world’s most powerful podium can be slammed in one breath for being too skinny, then chided in another for “letting herself go.” A terrific companion piece to the awards season’s recent #AskHerMore campaign.

Olivia’s journey with this Russell character (played by Brian White of Hostages, Men of a Certain Age, Moonlight) may have seemed a bit brazen for her usual level-headed self, but let’s face it, it was needed. As she told Cy, she needs to put those two other guys in her rear view mirror and move forward. And at first blush at least, Russell is a step up from Edison.

In fact, the only issue I had with this episode was… what Huck did, there in Sue’s kitchen. Shocking and random and brutal, a la one of Scandal‘s calling cards? Sure. But it was egregious. And it showed me a Huck that, regardless of his motive — to go “home,” which he can only do if David isn’t threatened by the tell-all’s existence — really should be “handled” in some way, by now. This is not a well person, and not someone I want other characters that I like to be in the proximity of. And the more no one (namely Quinn) does anything about it, in the face of the coldest cold-blood murder, the more detached I get from those enablers/abettors.

What did you think of “It’s Good to Be Kink”?