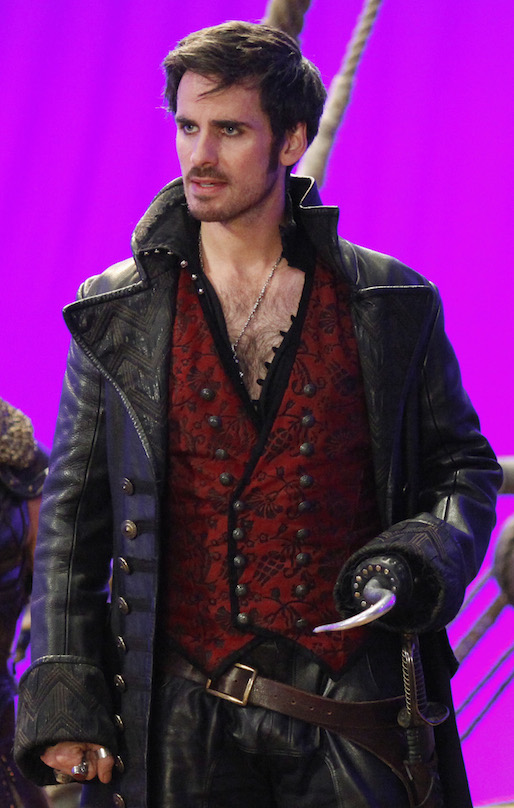 Go figure — Once Upon a Time‘s pirate captain has a skeleton (a Jolly Roger?) hiding in the closet, one that hints at a fishy past connection with the sea witch Ursula.

Thus far, Emma has given her beau a wide berth when it comes to disclosing this dark secret. But if and when it does come out, will Killian get the hook regardless? TVLine spoke with Colin O’Donoghue about this Sunday’s illuminating flashbacks (ABC, 8/7c) and the overall state of the “Captain Swan” romance, as well as lobbed some burning questions about living arrangements and, well, the Storybrooke economy.

TVLINE | Hook is being conspicuously and admittedly mum about his past with Ursula (played by Merrin Dungey) — is it for a good reason?
Yeah, you find out exactly went on in their past — and as most people have guessed, Hook doesn’t come out too well. He tries to help a young Ursula (The Following‘s Tiffany Boone) run away from her father Poseidon (Ghostbusters‘ Ernie Hudson), but as is always the case with ol’ Hook, he makes a couple of questionable decisions. It doesn’t necessarily go the right way. But in the present day, he’s trying to take a leaf out of Emma’s book, offering Ursula a chance at her happy ending in exchange for finding out what Gold’s real plan is.

TVLINE | It sounds like Hook is taking a more active role in assessing this new threat to Storybrooke.
The thing is, Hook genuinely cares for Emma (Jennifer Morrison), so he just wants to do whatever it takes to help protect her and the people she loves. He’s trying to be the best person he can be while at the same time struggling with the 300-year old pirate he used to be.

TVLINE | You talked about things going sideways for him in the flashback. On a scale of 1 to 1o, how dastardly is his pirate behavior?
I wouldn’t like to put a level on it, but it’s pretty much “not nice.” [Laughs]

TVLINE | Emma thus far has been quite understanding, letting Hook share his secret on his own time. 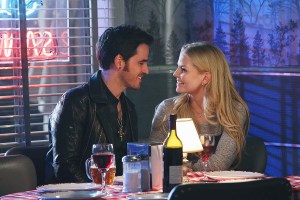 But when all is said and done, is that a stance she’ll come to regret?
I think that Emma knows and understands who this Hook is, in present day. She knows that he deeply cares for her and wants to do whatever it takes to make this relationship work. Much in the the same way that Belle sees the best in Rumple, Emma tries to see the best in Hook — the only difference is that Hook is genuinely trying to do the right thing, to be the better person, whereas Gold just can’t do that. Gold just always, always has the Dark One inside him.

TVLINE | That said, and being as objective as you can be: Is Miss Swan perhaps a bit unwise to have finally opened her heart to a pirate?
Objectively…? [Pauses to think] No, not really. Not this pirate, because he opened himself up to her first, and he is very genuine in that. Look, he’s always going to probably at some point make a bit of a stupid decision or be guided by who he was in the past, but most of the time he’s trying to do right by Emma and by everybody. I think she can handle him.

TVLINE | Emma’s parents thus far have had the moral high ground, when sizing up Hook as a boyfriend for her. If Hook were to learn their dark secret, might that even the playing field a bit?
I think that he would care more for Emma and how that would effect Emma than try to use it as some kind of leverage — you know what I mean? Because at the end of the day, it’s more important for him to try and be mindful of Emma’s emotional state, trying to help her be as happy as possible. 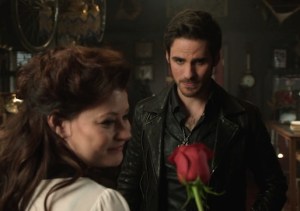 playing Rumplestitskin-as-Hook last week. Did you set out to bring a bit of Bobby Carlyle into it?
I actually did, but it’s difficult because you can’t obviously do an impersonation of another character — you have to do it within the confines of who your character is. But at points I tried to adopt little tiny movements that I’ve seen Bobby do. Or maybe strike a different cadence in the delivery of a line. Hopefully it worked!

TVLINE | Tell me, what are the living arrangements for Hook and Emma right now? Is she crashing with him..?
No, I think she’s still living with Mary Margaret and David; Hook is obviously crashing at Granny’s.

TVLINE | Paying what rent? And how does he make rent? Do we know? Is there any kind of an economy in Storybrooke??
I don’t know, but I don’t think Granny needs rent because she must make so much money from being the only place that people go to eat! [Laughs] Plus, I’m sure Hook has probably got a couple of doubloons tucked away somewhere.

TVLINE | Do you think Hook has eventual marriage on the mind?
Marriage? I don’t know, I think Storybrooke’s a difficult place to plan for the future, so he’s taking it one step at a time.

TVLINE | Right? No one ever gets a breather in this town.
Nope. No, no. If you want it to be smooth sailing, you don’t live in Storybrooke!

TVLINE | Do you have any questions? Anything you want to know about Hook?
Who ,me? No, not really. I’m pretty happy knowing who Hook is. And who he is is someone that’s great fun to play!