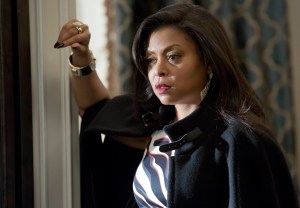 In the mood to watch Cookie Lyon throw shoes whenever you want? Better make sure you’ve got Hulu.

All episodes from the just-concluded first season are available now to Hulu subscribers, while all future episodes will be available the day after initial broadcast.

“Empire‘s story lines and music continue to dominate the popular culture conversation each week,” said Craig Erwich, senior vice president and head of content at Hulu, in a statement. “Since its premiere, the series has remained one of the top shows on Hulu and we are ecstatic to be the exclusive streaming home to the biggest show of the year.”

Empire‘s Season 1 finale averaged 16.7 million total viewers and a 6.5 demo rating, and in January it was renewed for a second season.

* Ruth Negga (Agents of S.H.I.E.L.D.) has landed the female lead in Preacher, AMC’s adaptation of Garth Ennis and Steve Dillon’s 1990s comic, Deadline reports. In the drama pilot — which follows Texas minister Jesse Custer on his search for answers from God — Negga will play Tulip, Custer’s unpredictable girlfriend who joins him on his journey.

* WGN America has released a trailer for Season 2 of Salem (premiering April 5, 10/9c), which finds John Alden (Shane West) heading into an explosive war — literally. Check out the full video below: