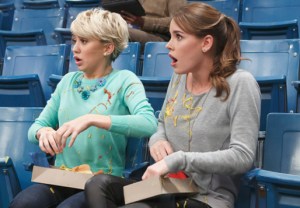 The fight for Danny Wheeler takes a tasty turn in Wednesday’s Baby Daddy spring finale (ABC Family, 8:30/7:30c) as Riley and Robyn finally lay their cards — and condiments, apparently — on the table.

“The crew rigged up these ketchup and mustard packets with tiny little straws in them,” Christa B. Allen tells TVLine of Robyn and Riley’s rink-side food fight, pictured above. “That was definitely a highlight for me.”

Things really come a head when Riley decides it’s time to tell Danny how she feels, but according to the episode’s official synopsis, that doesn’t go too smoothly: “When Danny realizes Riley knew he loved her but still dated Ben, will he follow his heart to the girl of his dreams or will his pride stand in the way?”

Allen, of course, can’t say exactly how the episode ends, but she notes that no matter what happens to the love triangle, “Riley and Robyn are still co-workers. They still see each other every day, so there are lots of possibilities there.” 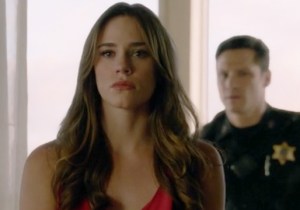 Meanwhile, Allen remains M.I.A. on ABC’s Revenge ever since Charlotte left for rehab in 2014, and even she doesn’t know when her character might return to the Hamptons.

“I haven’t heard anything,” she says. “But I know that they’re still waiting to hear on their next season pickup, so I think it’ll depend largely on that. … They do try to keep their options open on that show.”

For now, Allen is enjoying her arc on Baby Daddy, which could come to an abrupt end tonight, depending on how Danny reacts to Riley’s confession. After spending six years on Revenge, Allen says, “It’s nice to go to work and just laugh.”

Baby Daddy fans, how do you hope the Robyn-Danny-Riley love triangle works out tonight? And Revenge fans, any idea what might eventually bring Charlotte back to the Hamptons? Drop a comment with your thoughts below.