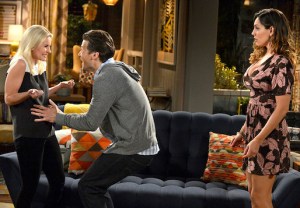 One Big Happy features Elisha Cuthbert’s (Happy Endings) welcome return to the small screen alongside the always-charming Nick Zano in his first series regular role since The WB’s What I Like About You. But is the show itself the right fit for this frustratingly good-looking, rib-tickling duo?

In the premiere episode, which aired Tuesday, we meet perpetually single BFFs Luke (Zano) and Lizzy (Cuthbert), a carefree bowling alley owner and his lesbian roommate who have decided to start a family. Their plan is no sooner interrupted when the free-spirited Prudence (Kelly Brook, Piranha 3D) walks into Luke’s life and literally sweeps him off his feet.

Luke almost immediately pledges his love to Prudence, much to Lizzy’s dismay, who is worried that the buxom brit will throw their baby-making plan off-track. Despite this, Luke agrees to marry his short-term lover after she warns him that she’s facing deportation, and the two run off to Vegas. When they return home to tell Lizzy the “good news,” she surprises them with her own: after a string of failed attempts, she and Luke are finally pregnant.

Lizzy initially scoffs at the idea that Prudence is in love with Luke, taking her for a “green card slut.” Moments later, Luke proclaims he isn’t sure he would’ve married Prudence had he known that Lizzy was pregnant, causing his blushing bride to storm out in utter embarrassment. Later that night, the newlyweds get drunk and decide they’d be better off parting ways, but when Lizzy sees how heartbroken this leaves her baby daddy, she runs after Prudence and begs her to stay with them in America. She accepts Lizzy’s offer and the atypical threesome become one big happy… well, you get where this is going.

The Peacock’s latest comedy pilot doesn’t offer much in lieu of laugh-out-loud moments, but the Ellen Degeneres-produced sitcom has the potential to become a perfectly decent Undateable companion piece. Brook exudes a bright and bubbly screen presence, and anyone who has seen Alex Kerkovich chow down on a slab of ribs knows Cuthbert is capable of so much more when she isn’t forced to play the straight man. Hopefully the show will do right by its cast and find its groove in subsequent episodes.

Now it’s your turn: What’s your take on NBC’s unconventional rom-com? Will you be another branch on One Big Happy‘s family tree? Vote in our poll, then sound off in the comments!