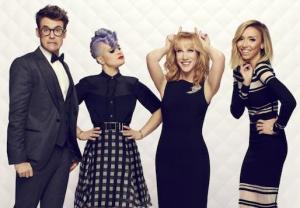 The other Jimmy Choo has dropped.

In the wake of two successive, noisy exits that depleted Fashion Police‘s rejiggered panel by half, E! has put the snark-on-the-stars series on an extended hiatus, The Hollywood Reporter reports.

Fashion Police will return with a retooled cast — Giuliana Rancic and Brad Goreski are expected to stay on — sometime in the fall, in time for the Primetime Emmys (to be held Sept. 20).

Three episodes that were slated to be taped this spring, without either Kelly Osborne or Kathy Griffin, have been scrapped.

Osborne parted ways with Fashion Police in late February, after blasting Rancic’s questionable (though scripted) aprés-Oscars remarks about actress/singer Zendaya’s dreadlocks. Griffin — who was brought on to fill the void left by the late Joan Rivers — called it quits on March 12, saying that her style of comedy did not jibe with the show’s directive: “I felt forced to comment about pictures of beautiful women in perfect dresses and say kind of bad things.”

All of the above came on the heels of E!’s red carpet coverage coming under a greater scrutiny, as A-list celebs started to ridicule the ridiculous “Mani-Cam” gimmick and the #AskHerMore Campaign urged talking heads to ask actresses smarter, less-superficial questions — like those directed at male celebs.

Do you think E! made the right call? Who would you add to (or subtract from?) the cast for when the show returns in the fall?