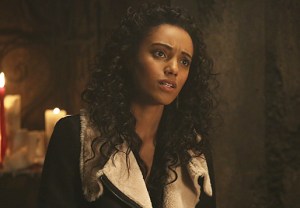 As Rebekah plays out The Originals‘ version of The Invasion of the Body Snatchers this Monday (The CW, 8/7c), you’ll be happy to know that newcomer Maisie Richardson-Sellers has a special supporter cheering her on from the sidelines: the original Rebekah, Claire Holt.

“I met her a couple weekends ago, by accident, actually,” Richardson-Sellers tells TVLine. “I was out with some of the writers in LA and she stopped by. We had a great chat about it all; she’s very warm, very welcome and very encouraging about the work I’ve been doing, which is great. She’s a sweetheart, and an amazing actress, so it’s a privilege for me to take on after her.”

Below, the new face of Rebekah Mikaelson discusses her character’s (literal) inner demons, a new “dynamic” with Marcel and why we should all be afraid of Dahlia.

TVLINE | OK, set the stage for us: Rebekah/Eva just slashed that guy’s throat and stole his girlfriend’s powers, so what’s next?
[Laughs] Well, there’s definitely going to be a battle. The fact that she suddenly woke up as Eva at the end of the last episode with absolutely no warning is definitely a concern. And the more we discover more about this other character, we realize she’s pretty powerful. 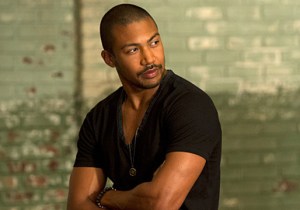 TVLINE | And let’s talk about Rebekah and Marcel. You and Charles Michael Davis certainly don’t lack chemistry. What can we expect there?
For the first time ever, Rebekah’s more vulnerable than Marcel. She’s always been the all-powerful Original, but now she’s in serious mortal danger, so it’s going to be interesting to see how that changes the dynamic between the two of them. He’s determined to figure out what’s going on, so they’ll be sending some time together. We’ll see what that means for the rest of their relationship as it continues.

TVLINE | You told me you watched the first season of The Originals to prepare for this role. How do you feel about Rebekah and Marcel’s current standings?
I’m really into the whole forbidden love thing, and Marcel is really the only one of Rebekah’s lovers Klaus hasn’t killed. He’s the one constant in her life, apart from her brothers, so I think their relationship is actually very tender and loving. They have a deep caring for each other, which really comes through in their scenes together. I’m excited to see how their relationship develops, but her being in a new body is going to make that a little awkward for her — there are going to be a lot of problems there.

TVLINE | I’m nervous about Dahlia’s arrival, but I feel like crazy-Rebekah is the perfect person to go up against her.
[Laughs] We’ll see about that soon enough. In the next episode, we learn more about Freya’s backstory with Dahlia, so we’ll know exactly who we’re dealing with and how serious the threat is. The fact that the family also has this Rebekah/Eva situation to deal with isn’t going to make it easy for any of them.

Originals fans, are you still pulling for Rebekah and Marcel? And are you as worried about Dahlia’s arrival as I am? Drop a comment with your take on Season 2 below.