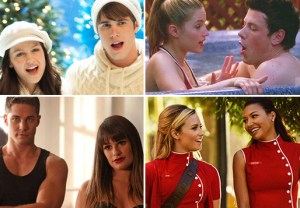 Throughout Glee‘s six-season run, the New Directions dated each other more liberally than Will Schuester applied hair gel, essentially throwing combinations at the walls of that Petri dish they called a choir room until something — anything! — finally stuck.

And it’s that date-now-ask-questions-later philosophy that TVLine is celebrating today — just four sleeps before the Fox comedy’s series finale — by ranking 45 of Glee‘s best and worst couples, and we promise you’ve forgotten more than you remember.

For example, we all recall Sam and Brittany’s ill-fated Season 4 romance, but it’s often overlooked that Santana dated him first back in Season 2. And who could forget that time Kurt’s dad walked in on him getting hot and heavy with Santana’s future bride in Season 1? I mean, besides everyone.

To quote That ’70s Show‘s Kitty Forman, “You kids change partners more than square dancers,” and we wouldn’t have it any other way.

A few things to keep in mind before proceeding:
1. In the interest of time and sanity, we excluded one-way crushes. (My apologies to the #Blam fandom.)
2. Second, and most importantly, this is just one person’s ranking. It’s meant to be fun, so save the drama for Michelle Obama.

Browse our gallery below to find out how your favorite couple ranked, then drop a comment with your thoughts: Any major couples we missed? Anyone ranked too high? Too low? Go on, defend your ‘ships!