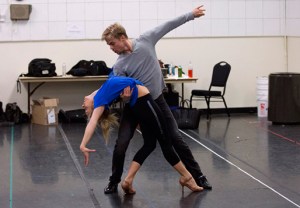 At the top of Dancing With the Stars‘ 20th season premiere, we were promised the start of a new dance era.

The only problem? It looks a lot like the same dance era we’ve been watching for the past 10 years.

In fact, for all intents and purposes, the beginning of Dancing‘s newest season unfolded exactly as you might have expected: Bruno Tonioli climbed on the judges’ table in an effort to show us how seriously he takes all of this; Derek Hough once again set the bar impossibly high with a firecracker partner in Nastia Liukin; and, perhaps least surprising of all, Julianne Hough gave us our now-weekly reminder that, yes, her cleavage is doing very well, thank you for asking.

That’s not to say there weren’t a few genuine surprises. Rather than letting Derek and Nastia sweep the competition, Rumer Willis and partner Val Chmerkovskiy proved formidable opponents for the duo. And, throughout the two-hour premiere, more than one contestant brought utterly genuine emotion to the dance floor. (But it wasn’t Redfoo. The night wasn’t that surprising.)

With that said, let’s get right into the awards for the night:

DANCE OF THE NIGHT
Rumer Willis and pro Val Chmerkovskiy (Foxtrot) — Knowing that the pair was performing last in a 120-minute broadcast, it seemed fairly obvious that Willis and Chmerkovskiy would provide one of the evening’s best and most memorable routines. But theirs was quite clearly the best of the show, largely due to Willis’ dedication in rehearsal and her disarming grace on the dance floor. (But if ABC could ask the house band to never, ever perform Hozier’s “Take Me to Church” again, that’d be swell.)

DANCE OF THE NIGHT: RUNNER-UP
Nastia Liukin and pro Derek Hough (Foxtrot) — While Tony Dovolani settles for an eighth-place finish at best this season (sorry, Chrissy Snow!), Hough has landed a partnership with another Olympic gymnast, who was just as nimble and elegant as one would expect. Plus, who doesn’t love a good kick line? But the duo’s flubbed lift near the end of their routine puts them just shy of the evening’s top honor.

PAIR WITH MOST POTENTIAL
Willow Shields and Mark Ballas (Cha-Cha) — It’s a little unsettling to think that Shields had never danced with a boy before signing up for Stars, considering Ballas is exactly twice her age. Still, Shields brought energy and attitude to her cha-cha and, better yet, she remained memorable despite nabbing the dreaded first performance slot.

WORST OF THE NIGHT
Robert Herjavec and pro Kym Johnson (Cha-Cha) — Sure, it’s nice to see Herjavec in a setting that doesn’t involve leather armchairs, business pitches and Mark Cuban. But the sight of Herjavec’s goofy grin — which was plastered on for the entirety of his technically lacking routine — might be even more off-putting than anything seen on Shark Tank.

MOST FRUSTRATING AUDIENCE PLACEMENT
Riker Lynch and pro Allison Holker (Jive) — Lynch infused his inaugural performance with energy, enthusiasm and quite a bit of genuine skill. I mean, I think he did. I could only see half of the fancy footwork in his jive with Holker, no thanks to the poorly placed mosh pit that prevented us from seeing some of the dance’s most exciting moves.

MOST INEXPLICABLY PRAISED
Charlotte McKinney and pro Keo Motsepe (Jive) — Following a routine that found McKinney at least a half-step behind her partner at all times, judge Carrie Ann Inaba would only tell the model that she had “a little to learn” as far as footwork is concerned. And while it’s nice that McKinney can poke fun at her own sexualization in Carl’s Jr.’s recent commercials, I wish the judges had spent as much time critiquing her technique (or lack thereof) as they did discussing her duct-taped breasts.

FEEL-GOOD PERFORMANCE OF THE NIGHT
Patti LaBelle and pro Artem Chigvintsev (Foxtrot) — No, the R&B music legend didn’t necessarily match her partner’s technical proficiency in their ballroom number. Yes, Julianne Hough was laying it on too thick when she called LaBelle a “gorgeous, graceful goddess” on the dance floor. But LaBelle seemed so eager to keep pace with Chigvintsev — “I’m not going to get dizzy anymore!” she promised, after her first rehearsal resulted in nausea — that it’s hard not to trot out the old “A for effort” adage. Seeing LaBelle break down in tears at the sight of the studio audience’s standing ovation was the cherry on top of a warm and fuzzy sundae. 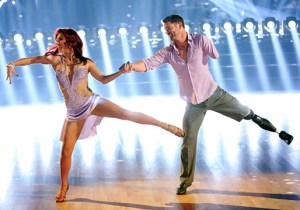 MOST EMOTIONALLY UPLIFTING
Noah Galloway and pro Sharna Burgess (Cha-Cha) — It would be foolish to say that Galloway — a double amputee — could ever match the technical skill of his partner or other celebrities competing in Season 20, given the loss of Galloway’s left knee. And yet, his commitment to overcoming those obstacles — combined with the undeniable chemistry between him and Burgess — left me reaching for the Kleenex long before the routine was over.

BEST USE OF ABC CROSS-PROMOTION
Chris Soules and pro Witney Carson (Jive) — I’m not sure back-to-back wins are in the cards for defending champ Carson, given Soules’ tense upper body movement throughout his jive. But when ABC has the opportunity to show Bachelor host Chris Harrison and Soules’ new fiancee, Whitney Bischoff, in the audience — with a perfect view of Whitney’s left hand, thank you very much — not much else matters.

MOST LACKING IN ENERGY
Redfoo and pro Emma Slater (Cha-Cha) — Party rock was not in the house as much as one would expect tonight. Despite Redfoo’s up-for-anything attitude, his routine with Slater was surprisingly dull and left much to be desired.

MOST PLEASANT SURPRISE
Michael Sam and pro Peta Murgatroyd (Cha-Cha) — Sam will certainly need to adjust to a new style of footwork if he wants to compete with frontrunners Liukin/Hough and Willis/Chmerkovskiy. But technicality aside — hey, if the judges can say it, so can I — Sam was surprisingly light on his feet in a complex first-week routine.

MOST UNDERWHELMING
Suzanne Somers and pro Tony Dovolani (Cha-Cha) — No one is denying that the ThighMaster has worked wonders on Somers’ 68-year-old gams. But the actress will have to impress in a number of other ways if she wants to close in on the mirror ball trophy — and her sloppy footwork in the cha-cha will be a big setback on her way to the finish line.

OK, your turn. Who were your favorites on DWTS’ Season 20 premiere? Who deserves to stay — and who deserves to go? Hit the comments with your thoughts! 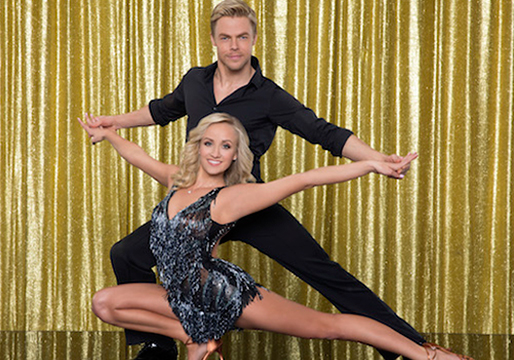