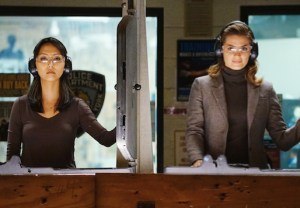 This week on ABC’s Castle, the arrival of a hot-shot supercop from Hong Kong amped up Beckett’s insecurities about what she has accomplished and where she’s heading in her career. In the end, was Kate truly feeling less great?

I know the premise of this episode, on paper and as teased by David Amann, had some on edge, worried that it’d weaken Beckett. That it’d knock her down a peg in the name of building up this peer, Chief Inspector Zhang (played by Enterprise‘s Linda Park).

And yeah, the first couple acts of the episode could have been a bit more nuanced in establishing Beckett’s awe of a onetime classmate’s promotion to captain, or modulating her reverence for Zhang. But my the midway point, you had to know it was coming — the reveal that Zhang doesn’t “have it all,” that her marriage to an action-movie star was on the rocks, that the “balance” she boasted of managing was non-existent, making her question her qualities as a mother.

So in that respect, once the Beckett vs. Zhang pistoling contest was out of the way, the back half of the episode was considerably stronger. Especially since the murder mystery itself was a better one, throwing a red herring or two in the final minutes before revealing Henry’s (somewhat improbable) killer. (Would someone so meek have the wherewithal to plot and execute a cold-blooded murder?)

One thing I liked about the central conceit was how it did raise questions about Beckett’s trajectory — she even referenced the D.C. job she got booted from, and lord knows we here do wonder when she’ll start taking steps to that future senate seat. So I was a little disappointed that the “priorities” list she was working on at the end didn’t even tease what’s going on in her noggin. (And while her citing “a family” as a next step would have been “sweet,” yeesh it would have been rather pat/slightly pandering. Happy those words didn’t come out of her mouth.)

I also enjoyed how Beckett’s own issues surfaced Rick’s “Patterson Syndrome,” in which he compares himself to the king of micro-chapters.

A couple other random thoughts on the episode:
* Why did the Zhang character have to hail from another country*? I am of course not questioning the need for diversity in casting, but in retrospect it seemed almost a superfluous trait, other than to have her hail from another country — though no commentary on cultural/societal differences came of it (a la Michael Crichton’s Rising Sun). *This question has been rephrased since original publication for greater clarity.
* Zhang’s successive disarming of Ryan and then Espo is one for the rewind-play-repeat files.
* Meanwhile, her 95 lb. self’s (largely off-screen) leveling of not one but, what, a dozen gym rats? A bit much.
* Beckett declaring, “I’m insecure!”: Did that help or hinder your enjoyment of her arc here? (Did it make things at all better that she hadn’t felt this was since she had pimples?)
* Linda Park is pretty gorgeous, right? Especially in those final goodbye scenes. Wowzers.
* So, have we officially had one too many “Castle quit writing Derrick Storm” mentions this season? Set-up for the “spinoff” series that got reported on a while back, or possibly pegged to Rick’s vanishing storyline/mystery?

What did you think of “Hong Kong Hustle”?