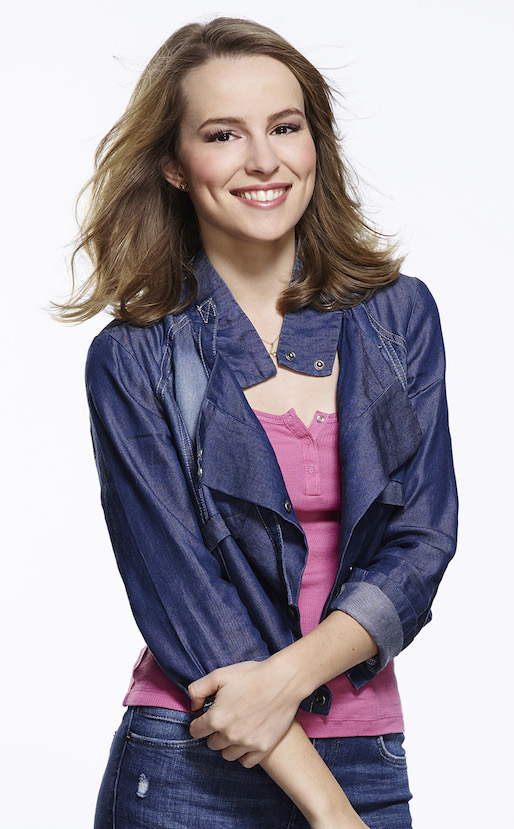 Ready or not, here Bridgit Mendler comes — to NBC’s Undateable, where for Season 2 (premiering Tuesday at 9/8c) she has been added as a series regular.

Familiar to the younger set (and their folks, ahem) as Good Luck, Charlie‘s Teddy, Mendler has a cool 100 sitcom episodes under her belt, yet the Bill Lawrence comedy marks her first full-on foray into the broadcast-TV waters.

TVLine spoke with the 22-year-old actress/singer about navigating that leap, her Undateable character’s most “un-Disneylike” behavior and more.

TVLINE | Was there any advice you received about making the transition from Disney Channel to a primetime broadcast series? There are obviously different schools of thought – like, Selena [Gomez] did Wizards [of Waverly Place] and then left, while Zendaya is now doing a second series [K.C. Undercover]. When did you know you wanted to move on?
People had told me that you should just keep doing one thing after the next, or that you should take time off, do school… and I feel like everybody really does pave their own way. So for me, I’ve kind of done a combination of things. I’ve been working on my music and going to school for the past year, and then [Undateable] came up and it just seemed like the right fit. I feel like I generally go off of just the gut feeling that something’s right. I think a lot of things in life do have to do with timing, and so for me this show came along at the right place and time.

TVLINE | Did you know that you wanted to do comedy again? I know you did that one episode of House….
No. I didn’t know that. But I thought that these guys were very funny, and I thought it was a fresh take on comedy that I hadn’t done before. It felt like a challenge, and so I think that’s why it was exciting.

TVLINE | Were you familiar with Undateable, or did you binge on it after getting the role?
I binged on it after I found out. And I genuinely, like, wanted to keep watching episodes of it! I’m excited for the new stuff to come out and hopefully it just keeps getting better.

TVLINE | What is your character’s name and how do we meet her?
You meet Candace at the bar [Black Eyes], where she is the new bartender — so that was a very different role for me, to be a bartender, coming from Good Luck, Charlie. I kind of stumble my way through my first few days at the bar, but they get used to me and start to appreciate me.

TVLINE | What particular set of idiosyncrasies does Candace possess?
Candace puts her foot in her mouth, a lot. Like, there are observations about people that you might all know are there but you just don’t say out loud, because it’s not PC. For instance, one time I asked my grandma if she dyed her hair and my dad told me later that’s probably something I shouldn’t have asked, because an old woman doesn’t want you to be calling her out on hiding her grays. But Candace has made a few comments like that where she will insinuate those things probably more than somebody else would.

TVLINE | Does she have a specific dynamic with any of the guys?
Specifically, I think she really wants to be liked and she wants to fit in, and that’s an interesting combination with how she won’t compromise her moral ideas of what’s right. She’s kind of been going along with the flow of whatever the guys say, up until the point where they start saying things about dating that she doesn’t agree with and she thinks aren’t right.

TVLINE | Is she positioned as a potential interest for Justin (played by Brent Morin) or…
She hasn’t been positioned that way yet. I mean, we do sing together, I’ll say that much. (She has since led a music video pegged to the series’ return.)

TVLINE | I was going to ask if you get a chance to do that. The show tends to have impromptu moments where he’ll launch into song and someone joins him.
That’s very much how it goes. It’s impromptu, it’s usually something that’s culturally relevant… and people usually eventually tell him to stop.

TVLINE | Speaking of your music, 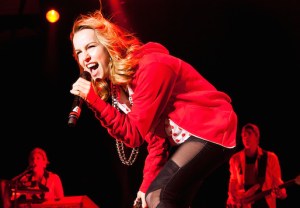 what’s next for you as a singer?
I’m working on finishing up my second album, and then I’m hoping to be putting out a single early this year.

TVLINE | When “Ready or Not” and “Hurricane” were getting tons of radio play, I explained to my sons (age 12) that with some Disney Channel actresses, the singing is obviously just a side thing. But with you, it’s different. You were charting.
Oh, thank you. Thank you. I appreciate that. It’s funny, being in the middle of that [buzz] you don’t really have perspective on the arc of things, so I didn’t realize it was a special moment at that moment. I was kind of just focusing on getting the music out.

TVLINE | So, what is the most “un-Disneylike” thing Candace has done so far?
Convinced one of the guys out of a booty call. He was all lined up for a booty call and Candace says, “No, you deserve more.” So I guess in that sense [Good Luck, Charlie’s] Teddy, like Candace, cares about people and doing what’s right. But I think Candace is a bit more clueless and off the wall than Teddy.

TVLINE | Yeah, Teddy would do the occasional goofy thing, but I always felt like she had her act together.
She knew what was going on, yeah.

TVLINE | Do you get any feedback on Good Luck, Charlie‘s same-sex moms episode, because that was a big moment for the channel and for the show. Did people on set sense it was important?
Yeah, people knew. People were really honored to handle that subject and just wanted to make it also as much like any other episode as possible.

TVLINE | Lastly, I am almost required to ask: What makes Bridgit Mendler “undateable”?
That I can be shy, and I can be a big nerd.

TVLINE | A nerd in what way?
I just think I’m a nerd because nerds might have lot going on in their head that they’re thinking, but they don’t know how to put it out into the world in the right away sometimes. Also, a nerd is somebody who is really into things that aren’t traditional, which I’d say is exactly what I am!