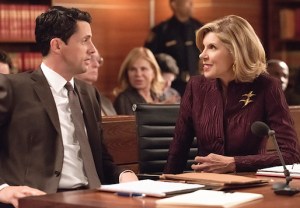 Watching this week’s installment of The Good Wife, I couldn’t help but think of a line made famous by Chris Isaak (almost 25 years ago!) in his smash hit “Wicked Game” (you know, the one with the black-and-white video where he and supermodel Helena Christensen played extra-sexy Twister): “It’s strange what desire will make foolish people do.”

Yep, as she points to her public halo and asks “Is this thing on?”, Alicia Florrick finally succumbs to an extramarital Humpty Dance* only 72 hours before Election Day. And right there in a very public parking garage, the Empress of Chunky Necklaces Diane Lockhart gets her gears shifted (if you catch my drift) by her gun-expert hubby Kurt. And while, alas, Kalinda and Cary get approximately 18 seconds of combined total screentime this week, I still like to imagine that they’re regularly re-creating their “Steamy Windows” dance of 2014.

But getting past the sex, this week we see Alicia and Diane make bold plays that could rock the foundations of their marriages: The former by attacking her spouse’s public record, the latter by, well… let’s get to that “OMG!” moment in just a moment, as we recap action of “Open Source” — a far more traditional installment coming off of last week’s head-spinning “Mind’s Eye.”

PUTTING THE ‘BANG’ IN ‘BANG BANG’ | We learn this week that Diane’s turn-ons include expertise under fire, power plays and perhaps most of all, winning. Finn (oh, hi there, Mr. Sexy Brown Suit!) brings to his landlords a case in which his client is suing a gun designer for posting “open source” schematics for a 3D gun that misfired and left him paralyzed. The suit provides a fascinating and completely unique take on second- (and first-) amendment rights — and makes me a little wistful for the show’s erstwhile “case of the week” structure.

Anyhow, after Kurt provides dazzling (yet typically compact) testimony, Diane finds herself so turned-on that she’s can’t — and won’t — wait ’til they get home to show her appreciation. “You make me feel like I’m 22,” she sighs, while proving she knows how to drive stick right there in the front seat of their car.

Later, though, when Kurt’s followup studies point to the printer designer as the culpable party, he bristles at Diane’s refusal to drop the weapons designer in the suit — pointing out that she’s targeting him not for being negligent, but because she finds him “politically offensive.” He won’t continue his work on the case, he adds, because he “won’t testify for a crusade.”

Think again, buddy! Diane actually has her husband served with a subpoena — a boss move, but not exactly the stuff of Valentine’s cards — and the resulting courtroom tension is thicker than Kris Jenner’s delusions of grandeur.

All’s well that is touched by (the briefly seen) Kalinda, though, whose assistance allows Diane to prove that, yep, the gun designer was actually to blame. His attorney makes a $5 million settlement offer — way more than his insurance can sustain — funded by what she won’t say out loud is the NRA.

The real question mark at the end of the case, though, is whether Diane and Kurt’s marriage will survive her hard-charging legal maneuvers. “I let my political passions drive a wedge between us, and that’s not how we do things,” she says, clearly apologetic, and Kurt’s one word response, “True,” is as close to a mushy “I forgive you, darling” as the dude is gonna get.

What I love about this story arc, though, is the never-spoken subtext that it’s not just Diane’s “political passion: driving her here. Will’s violent, senseless shooting death has loomed so large over Season 6 that it’s lingering memory should be credited as a series regular. Kurt, well aware of Will’s importance in Diane’s life, has to understand all this — which is why it makes sense for him to treat the slightly-bigger-than-a-molehill disagreement as nothing more than a molehill. At episode’s end, Diane agrees to accompany her man on a deer-hunting vacation in Wyoming — with the richest of the rich — which should provide tons of fodder for a future TVLine Quotes of the Week column.

“GOD, HANDSOME MEN ARE SO WEAK” | Prady’s campaign manager can’t convince him to smear Alicia — even after she wins that crucial newspaper endorsement that’s put her up by three points — but David Hyde Pierce’s alter-ego responds better to the idea of going after Peter.

Johnny and Josh determine Alicia’s best course of response is to join her opponent in pointing out her husband’s failures as State’s Attorney — especially those claims of systematic racism — but the message that seems to rattle Alicia most is that Johnny is leaving on Election Day to work on a campaign in Sacramento (the city in California — not some previously unheard-of Chicago suburb).

Eli, though, catches wind of the plan to “throw Peter under the bus” — and breaks out all the threats on Johnny, telling him he’ll lose his new job if he doesn’t change strategy. Johnny winds up mimicking Eli’s words when he talks to Alicia — “you guys are a package deal,” he says of the Alicia-Peter union — but it’s Marissa who winds up confronting him on his self-serving move. “You’re a real dirtbag, you know that,” says She Who Was Hired as Bag-Woman, But Has Quickly Graduated to Chief Truth-Teller.

Alicia shares a lovely scene with Prady while they await their turns to speak at a luncheon for black business leaders — one in which he confesses he’s not actually gay, but a Jesuit whose religious beliefs stopped him from marrying after his divorce… a fact that makes him “not someone you want to get a beer with.”

Alicia, in spite of her atheism, is clearly struck by the religious code of her rival. “You are better than I am,” she sighs, and you can almost see that in a perfect world, she’d concede the race to him. It’s just that, at the end of the day, she knows she’s not running for State’s Attorney of Perfect World, IL — but a very real, flawed and ethically murky place.

As she’s prepping to take the stage, though, Johnny calls and tells her he’s decided she should go after Peter — with no mercy whatsoever. The excitement in his voice — let’s kill your husband (politically) — has a charged, almost sexual undercurrent, one Alicia doesn’t seem to mind. We hear her kick off her talk by noting how the “most insidious form of racism is unconscious” — and how Peter, while a good State’s Attorney, was one who made mistakes.

The electrical charge of Alicia and Johnny’s decision lingers long afterward — and as he fumbles for the elevator outside her apartment, she asks him if he’d like to come inside. When one (elevator) door closes, another one (ahem) opens, and the two engage in a fevered kiss that you just know is going to end in $2,000 worth of tailored suits all over the floor of Casa Florrick.

THE CANNING IDENTITY | In the week’s most capricious arc, an ailing Canning requests Alicia visit him in the ER – where he tells her he wants to donate $18 million in stocks to the family of the dead girl who donated the kidney he’s just received. (Watching Alicia repeatedly recalculate how ghoulish or not it might be to pull out the file on Canning’s wrongful eviction suit against Florrick-Agos is the most uncomfortably amusing part of the hour.)

Trouble is, the girl’s family wants the money sent director to “The Strong Arm of Liberty” — a pro-Palestine group with possible ties to HAMAS — which is allegedly why Canning’s attorney David Lee refuses to move forward. (The shifty attorney’s snide remark about Canning and Alicia finding ” “other ways to facilitate the killing of Jews” is classic Zach Grenier.)

Alicia winds up squeezing an unconscious Canning’s hand and oversharing that, “I know you’re a bad man but I sort of miss you. I know that’s weird. I don’t know why. I seem to have some bad-boy issues.” To me, the moment underscores Alicia’s disenchantment and disconnection from her core people — her son, her former law partners, her brother, the late Will Gardner, even Peter — since she’s embarked on a run for office. On paper, it makes no sense that she’d share her vulnerability with Canning — and yet her desire for some kind of connection completely overtakes her in the moment, especially one in which she’s contemplating mortality and purpose.

At the prompting of an outraged Eli — “Are you sending money to the Palestinians?” — Alicia figures learns she’s not exactly on target with her insistence that “Canning’s not gonna prank me on his deathbed!” So she finally goes and confronts her nemesis, who feigns any knowledge of giving Alicia power of attorney or directing her to redistribute his stock funds. “I was in a fugue state!” he exclaims, as Michael J. Fox reminds us why he’s a four-time Emmy winner in comedy. And as Alicia pushes Canning’s phone well out of reach — her eyes both angry and amused — Julianna Margulies reminds us she can do more than drama, too.

What did you think of this week’s Good Wife? Were you shocked by Diane’s sexual and legal behavior? And how about the Alicia-Johnny kiss? Sound off in the comments!