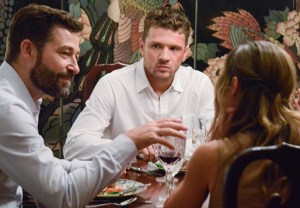 Instead of offering up yet another hour of How Many Ways Can Ben Crawford Look Guilty?, Sunday’s episode of Secrets and Lies did the unthinkable: It introduced not one, not two, but three characters who may have been involved in Tom’s death.

Of course, that doesn’t mean the heat was taken off Ben at all. The throng of reporters was still outside his home, albeit in a smaller group, and Detective Cornell’s attitude toward him was icy enough to make Frozen‘s Arendelle look positively sweltering. And to top it off, Ben’s initial suspicions about neighbors Joe and Vanessa led to nothing but an awkward dinner party, a tragic story of child abuse and a really unsettling incest subplot.

Before you give me your thoughts on this week’s episode, let’s break down each of the hour’s shady characters:

NATALIE | For the first time since this whole mess began, Detective Cornell arrives at the Crawford home looking not for Ben, but for his daughter. As it turns out, Natalie was not babysitting Tom two nights before he was murdered, as she’d initially stated. Instead, she got Vanessa to play nanny for her while she snuck out to a concert with Cooper. Strangely enough, Cornell doesn’t pursue Natalie as a suspect beyond that for the rest of the hour, but it’s enough to put doubt in our minds about Ben’s eldest daughter.

Oh, and by the way, it turns out Natalie isn’t pregnant after all. As her sister Abby so bluntly puts the results of the pregnancy test: “It says minus. That’s good, right?” (I have a feeling that Ben and Christy are just going to skip that whole “birds and bees” thing with their youngest girl. She already knows enough.) And despite the stress of their daughter possibly getting pregnant at 17, Ben and Christy are somehow drawn closer by the whole ordeal, at least enough to make you forget that Ben’s been sleeping on the couch for the last few weeks.

DAVE | Ben’s ex-BFF has gone back to living with his mom, but he still manages to get caught up in the mystery of Tom’s death. Case in point: That concert Natalie bailed on babysitting to attend? She didn’t go with Cooper, but with Dave, which makes me feel nine kinds of uncomfortable.

Still, Dave doesn’t remain a suspect for long this week: Natalie assures Ben that Dave has never laid a hand on her (including the night when her body glitter got all over him, the result of a comforting hug he gave her in the wake of Ben, y’know, crashing a high school party and threatening to murder a teenager). For now, at least, Dave’s is a name we can cross off the suspect list.

JOE & VANESSA | The real suspects of the hour, though, are Ben’s doctor neighbor and his wife. Vanessa informs Ben that she, too, had a young boy, named Malcolm — but he was “taken from her” a long time ago. While Vanessa’s pouring drinks in the kitchen, Ben uncovers disturbing photographs of Malcolm, who is covered in bruises. From there, Ben does a little digging — using a seriously archaic Internet browser, might I add — and learns that Joe was once a doctor in England, before getting fired for sexual misconduct, changing his name and moving to the States.

Ben’s mounting suspicions come to a head during a dinner party hosted by Joe and Vanessa. Joe finds Ben rifling through the files in his office, forcing Ben to do the sensible thing and scream, “You murdered my son, and you used my flashlight to do it!” in front of a group of strangers.

Later, after Ben and Christy return home (and we’re treated to a long scene of Ryan Phillippe running in the rain with a white T-shirt on), Vanessa follows them and explains the truth: Malcolm suffered from hemophilia, causing him to bleed internally for months without his parents knowing. When they sent Malcolm to a group home for proper care, the home’s manager beat Malcolm — so brutally, in fact, that Malcolm died before his abuser could be punished in court.

But wait! There’s more! Although Vanessa and Joe seem to have cleared their own names, Jim Fenton — Ben’s current (and only?) paint client — reveals that he’s a reporter, and he’s uncovered a massive scoop about Ben’s neighbors: They’re related. Indeed, Joe and Vanessa are half-siblings, and Malcolm’s hemophilia was a result of their incest. Uh, okay.

Still, no matter how many heebie-jeebies you get from Joe and Vanessa’s backstory, they’re still unable to surpass Ben on Cornell’s list of suspects. At the end of the hour, the detective presents Ben with a voicemail he intended to leave on Jess Murphy’s phone the night that Tom was killed, but mistakenly left for another woman with a similar phone number: “I don’t know what’s going to happen tomorrow,” Ben slurs on the recording, “but I just wanted to say I’m sorry.”

Ah, and just when he was beginning to look innocent…ish.

OK, your turn. What did you think of Secrets & Lies‘ latest episode? Hit the comments with your thoughts and theories!