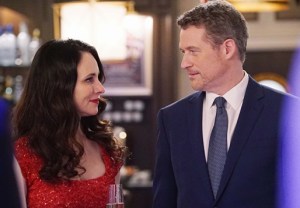 The Fourth of July came early on Sunday’s Revenge, bringing fireworks, arrests and — wait for it — death! Dun, dun, dun.

Proving she’s still so terrible at this whole “plotting” thing, Margaux set her sights on Ben’s ex-wife April (Sarah Lancaster!), a waitress who’s currently hiding from an angry ex lover in Upstate New York. Ben and Emily, of course, intervened — Em even slipped into what appeared to be a Sookie Stackhouse costume — and effortlessly thwarted Margaux’s latest middle-school attempt to get even.

Nolan was her next target, but you can read more about that epic failure a little further down in the recap. (Hint: It involved Louise, a flash drive and a really long fall.)

But because even Ms. Lame-archal was bound to achieve a small amount of success eventually, she managed to have Jack arrested for drunk driving — even though the dutiful bartender hadn’t touched a drop all night. Watching the cops take away little Carl was heartbreaking, but at least Emily and her new man arrived just in time to pour salt in Jack’s gaping wound.

Seriously, can we talk about that lingering Emily-Jack-Ben situation for a minute? I’m still not OK with the results of last week’s big confession, and I’m not the only one. “When Emily moved on, I thought she’d be moving towards Jack,” Nolan said this week. “I think he did, too.” Yeah, well, we all did. When is that girl going to get it together? (And what was up with that line, “Jack, it’s good to see you on a boat again”? Emily, you don’t get to do that.)

FREE FALLIN’ | After striking out as Victoria’s attorney, Lyman tucked his tail between his legs and made amends with Louise — or, at least, he pretended to reconcile with her in order to steal all of Nolan’s secrets. His deception wasn’t the least bit surprising, nor was his new partnership with Margaux, but there was a fun little twist to this week’s tale: While wrestling an incriminating flash drive from her brother’s grip, Louise kinda sorta pushed him off a cliff to his death. You know, I still want to believe that Lyman will eventually hook up with Nolan, but this whole “death” thing is starting to make me doubt my prediction. Oh well, at least Nolan and Louise’s sham marriage is stronger than ever!

PARTY’S OVER | Natalie really should have known better: You can steal Victoria’s inheritance, and you can get in bed with her ex — but when you take the reins of one of her annual soirees, you’ve gone too damn far. The Independence Day party set the stage for Nat’s inevitable takedown, as we learned she was actually one of Conrad‘s mistresses who literally starved his father to death until he agreed to change his will. So it looks like Natalie’s officially a thing of the past, which is good, because I didn’t like the person Victoria was becoming. (Seriously, spying on David during his date with Natalie like a jealous lunatic? Victoria, girl, you’re better than that.)

Revenge-rs, your thoughts on Lyman’s death? Natalie’s takedown? This Ben-Emily nonsense? Drop ’em all in the comments section below.