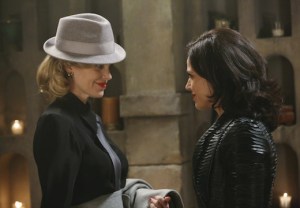 This week on ABC’s Once Upon a Time, Regina went undercover with the Queens of Darkness, Belle got Hook-winked and in flashback we saw how a forlorn Maleficent got her groove back.

IN THE FAIRYTALE LAND THAT WAS…. | Spying spry Snow White’s life of glee and horse-riding ribbons, Regina gets antsy to dive into her apprenticeship with Rumple, but he warns her not to rush things. When she is found with a spell book of Maleficent’s, Rumple poofs her to outside the sorceress’ castle, where the lone tree still burning from her dragon self’s long-ago rampage still burns. Inside the castle, Regina finds one hot mess of a Mal, doped up on a diluted version of her sleeping spell and ruing her nemesis Briar Rose. Dismissed by her would-be mentor, Regina learns that Briar Rose’s daughter Aurora is to wed — news that surely will light a fire under Maleficent. But it doesn’t, for as Mal admits, she’s can’t turn into a dragon anymore.

Outside, Regina inspires Mal to “get her spark back” via the lone burning tree, and she almost does, but not before Aurora’s father King Stefan arrives to capture the ladies. Using her budding fireball skills, Regina frees herself and distracts the guards as Mal gets her dragon on. Later arriving at Aurora’s room, Mal deflects the young woman’s taunts and pricks her finger, sending her into a 100-year sleep — and then thanks Regina for her support. Back home, Regina tells Rumple that she has learned the keys to revenge: patience, until she can one day take away what Snow loves most.

IN STORYBROOKE…. | Regina begins her undercover op with the Queens of Darkness, who first test her with a game of “Don’t Be a Hero,” at the railroad tracks (inviting the question: how do trains presumably from the outside world pass through a cloaked town?). Failing that test but still having Mal’s vote, Regina suggests they go find some real trouble, which apparently includes torching cop cars. While Regina debriefs the Charmings and Emma, Rumple tentatively OKs the Queens’ inclusion of Regina, surmising that her freshly broken heart might turn her into a “monster” again. Mal later reveals to Regina their objective — to find The Author — which tees up their next task, kidnapping young Pinocchio. After Regina sneaks into Marco’s home and uses a sleep spell on him and the boy, Emma shows up to question the plan. Regina assures that she’ll look out for/not torture the lad, and to keep Emma off her tail ditches her old-school Blackberry.

Elsewhere, Hook busts up Belle’s latest date with Will to warn that the Queens are possibly after the Dark One’s dagger, so they should probably re-hide it. Belle — making us wonder if her name is in fact short for “Brain Cell” — goes along, barely any questions asked, unaware that the pirate she later hands the blade over to is none other than estranged husband Rumplestiltskin. Later, Rumple-as-Hook visits Belle at the shop under the pretense of some “pirate’s oath” nonsense, but really to get the 411 on her and Will. After so much torment and betrayal by Rumple, the new guy “makes me smile,” she explains.

As the episode comes to a close, Regina and Mal arrive at Rumple’s cabin, tipping off Regina to the fact that the Dark One is back in town and in cahoots with the Queens — at which point he comes out of the shadows, dagger in hand. After Cruella and Ursula lug Pinocchio inside (they were conspicuously MIA for the abduction, so they get saddled with grunt work?), Rumple reveals his plan to pump not the memory-less lad for answers, but Pinocchio’s grown self. And with a wave of the dagger, the boy is transformed into adult August — a neat trick Emma probably would have liked to see performed during Season 2, Episode 18!

What did you think of “Enter the Dragon”?

Want scoop on Once, or for any other show? Email insideline@tvline.com and your question may be answered via Matt’s Inside Line.