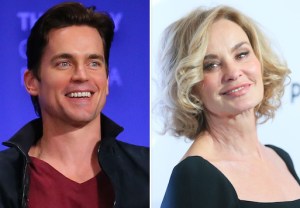 White Collar alum Bomer has been tapped to star opposite Lady Gaga in the latest installment of the anthology series, it was announced Sunday at the FX hit’s PaleyFest panel.

Additionally, Cheyenne Jackson (30 Rock, Glee) has also joined the Hotel ensemble. There’s no word on the characters Bomer and Jackson will be playing.

Also during the PaleyFest panel, Lange confirmed her decision to not partake in the fifth season, telling the crowd, “Yes, I’m done.” She added: “We’ve had a great run here. I mean, I absolutely loved doing these four characters” in the original/Murder House, Asylum, Coven and Freak Show editions.

Bomer’s Hotel stay brings him back into the Horror Story fold following his guest stint in last season’s Freak Show. It also extends his working relationship with AHS exec producer Ryan Murphy; the pair’s past collaborations also include The Normal Heart, Glee and The New Normal.