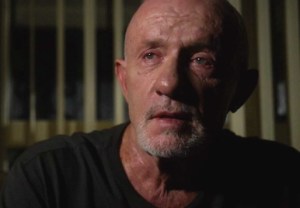 THE PERFORMANCE | We expected the Breaking Bad prequel to shed light on the origin of its titular lawyer. But perhaps no one could have anticipated the deeply emotional deep-dive this week’s episode delivered with regards to the strong, oft-silent Mike Ehrmantraut.

For much of the hour, we were treated to Banks’ known bag of tricks — the defiantly deadpan expression, a menacing intonation of the question “How well?” lobbed at a cab driver. But as Mike’s daughter-in-law Stacey pressed on about the suspicious nature of her police officer husband Matty’s death and his odd behavior just prior, Banks took his stoic alter ego to exciting new places.

Recounting the dilemma that Matty had found himself in — invited by dirty colleagues to take a “taste” of ill-gotten greenbacks — Mike detailed for Stacey the lengths to which he went, to save his son from the blowback of being a do-right cop. And as he did, Banks made sure we felt every ache in his alter ego’s heretofore hidden heart.

“He put me up on a pedestal. And I had to show him that I was down in the gutter with the rest of ‘em,” Mike said of his initially futile but ultimately successful bid to make Matty fall in line with his morally fallen comrades. “Broke my boy,” Banks lamented through wet eyes. “I broke my boy! And they killed him two days later…. I made him lesser, I made him like me…. And the bastards killed him anyway.”

Just as impressively, moments later Banks resurfaced a bit of the more familiar, pragmatic Mike, when Stacey wondered aloud who in turn killed the cops who took out Matty. “You know what happened,” he responded, the strength in his voice and resolve returning. “The question is, Can you live with it?” With his illuminating performance, Banks has us champing at the bit to revisit Mike’s every Breaking Bad moment with a new perspective. 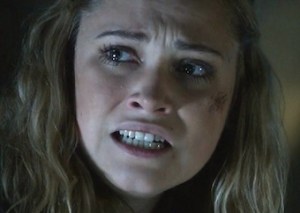 character on The 100, it’s easy to underestimate Eliza Taylor as just another young, pretty CW face — but that would be very foolish. (Do not mess with Clarke!) Throughout the second season, the actress has played Clarke as fierce yet emotionally conflicted. Her inner turmoil culminated in her most heartbreaking moment as a leader in Wednesday’s season finale when Clarke made the decision to kill all of Mt. Weather’s inhabitants, including the innocents and children, to save her own people. Although Clarke held strong and steady in her choice, Taylor’s tearful eyes conveyed her character’s crushing loss.

HONORABLE MENTION | In the 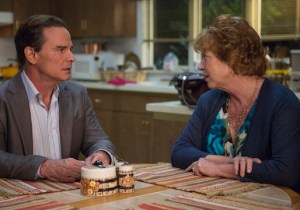 surprise-filled Girls script for “Tad & Loreen & Avi & Shanaz,” Lena Dunham and co-writer/fellow EP Jenni Konner gave Becky Ann Baker a helluva gift, and how did she repay them? By acting the living daylights out of it, that’s how! Off her husband’s confession that he’s gay, Hannah’s mom careened through a dizzying array of reactions, from disbelief to anger to, ultimately, an obscene sort of acceptance. Through it all, Baker played the rich material with a mixture of spontaneity and world-weariness that made us almost feel guilty for eavesdropping.

Which performances rocked your TV this week? Tell us in the comments!