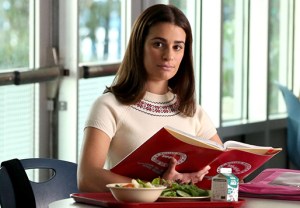 Bad news, Gleeks: There are only a few days left until the curtain comes down on the Fox series, in its two-hour finale (airing March 20, 8/7c).

The good news? TVLine at Friday night’s PaleyFest event got an early screening of the final episode’s first hour, and we’ve got 11 teasers to help prepare you for the show’s farewell.

As previously reported, Glee‘s series ender will flash back in time — more specifically, to 2009, during the glee club’s humble beginnings — before jumping forward to reveal the futures of Rachel, Kurt and the gang.

But that’s enough chit-chat. Here are 11 tidbits from the finale’s first hour, which takes place entirely in the past:

1 | Rachel and Kurt have a Wicked-ly good time on their first duet together.

2 | Mr. Schuester shares a scene with Sue in which she isn’t his nemesis. (Seems impossible, but it happens!) 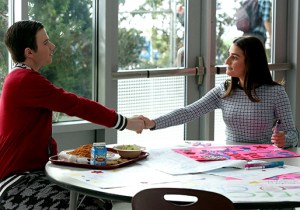 4 | Mercedes quite literally takes it to church in her first solo of the episode.

5 | A character you wouldn’t expect to see anywhere near McKinley High School in 2009 makes a surprise appearance.

6 | Despite Cory Monteith’s absence, Finn’s inclusion in the glee club plays an important role in the finale’s first hour. (Grab your tissues for this one.)

7 | At least one glee club member gets an extra-large Slushie to the face.

8 | You haven’t seen the last of Sheets-N-Things — or the pregnancy-faking woman who works there.

9 | There are multiple well-timed references to MySpace and Blockbuster, both of which were somehow going strong just six years ago.

10 | Sue delivers a prophetic line that perfectly encapsulates her relationship with Mr. Schuester and his students.

11 | The last musical number of the hour will make you more than a little misty-eyed — especially if you’ve been watching Glee since it began.

Any theories on our spoilers? Hit the comments and tell us what you hope to see in Glee‘s series finale.