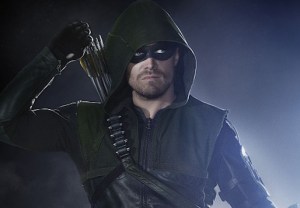 For Arrow‘s Oliver Queen, “It’s going to get worse before it gets better,” series star Stephen Amell warned Saturday night during the CW series’ PaleyFest panel.

Acknowledging that it’s “interesting to have a Big Bad who’s very interested in Oliver staying alive” — as Ra’s al Ghul obviously is, having invited his onetime opponent to assume leadership of the League of Assassins — Amell noted, “If you know Ra’s and his tactics… you realize that it’s an ‘offer’ in name only. It’s a demand. And if Oliver says no, there will be incredibly dire consequences.”

That dilemma — be him else be felled by him — marks “the big thrust of the last third of the season,” Amell said, resulting in a “more defeated” Oliver. That said, the actor posited that after roughly “70 episodes of ‘Don’t talk to me'” stand-offishness by Team Arrow’s leader, there have to be happier days ahead, at some point. “You can only stare broodingly out a window for so long,” he stated.

* Surveying disenfranchised Felicity’s current POV on Oliver, Rickards said, ‘She’s like, ‘Hell no, I’m not going to deal with somebody who only gives half of their emotions.’ But she still cares for him deeply.” Right here and now, however, “She needs the time to go and explore her options,” Ray Palmer included. “She needs that nourishment and support of love.” Amell’s stance? “If there’s… a moment where Oliver finally decides to ‘let go’ and get into the land of the living, the object of his affection would most likely be Felicity — but she’s spoken for.”

* Reeling as Thea is from the discovery that Malcolm duped her into killing Sara and then kept it a secret, “I don’t see her coming back from that lightly. I don’t see it going well,” Holland said. “Every time he comes into the room, I just might kill him!” Especially since protecting her own life, and not taking others’, was her sole reason for training under her father. “I don’t think she ever fathomed the idea of killing someone, [so] this is a huge weight on her shoulders,” the actress said.

* Asked how Diggle is juggling life-threatening derring-do with his role as father and soon-to-be husband, Ramsey explained, “The struggles that Oliver has,” pushing away a loved one as he did with Felicity, “Diggle has reconciled much of that. He can have a family and a wife and a child, and he can also fight crime… The struggle that Oliver has, Diggle doesn’t.”

* Rickards affirmed that during her next visit to The Flash, Felicity will “go computer-to-computer” with her own arch nemesis, Brie Larvan aka DC Comics’ Bug-Eyed Bandit (played by The Walking Dead‘s Emily Kinney). “We have a ‘tech-off.'”

* Speculation about Malcolm’s love life led to Guggenheim jokingly invoking the name of Felicity’s mother, Donna Smoak — to which Barrowman roared, “That would be so awesome!” But then Blackthorne jumped in to note, “Excuse me, Lance hasn’t been laid in seven years!”

* Asked by a young audience member to tease no less than Season 4, Kreisberg offered that because of how the current season ends, “The show will never be the same again.”