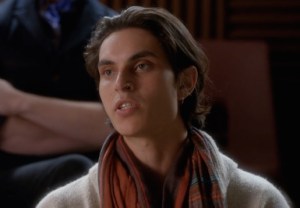 We’ve got questions, and you’ve (maybe) got answers! With another week of TV gone by, we’re lobbing queries left and right about shows including Glee, The Bachelor, Agents of S.H.I.E.L.D., Empire and The 100!

1 | Of all the guest stars on last week’s Glee, might the return of a dreadlock- less Joe have been the most shocking? (Seriously, where has he been all this time? Hiding his hair from E!’s Fashion Police?)

2 | For those children of the ’80s savoring (not binging) Netflix’s Unbreakable Kimmy Schmidt: Did the use of a Baby-Sitters’ Club book as a key plot point make you feel a bit nostalgic for Kristy, Stacey, Mary Anne, Claudia and the crew?

3 | On Once Upon a Time, did Regina waxing nostalgic about “when it was just [Henry] and me, Robin and Roland” come off as a bit disingenuous? (In the course of saving Storybrooke from the Snow Queen during Season 4A, how much time could that ersatz family possibly have spent together?) On the flip side, was it nice to see continuity acknowledged when flashback Maleficent commended Charming on recognizing her, given her different look during the Season 1 finale? 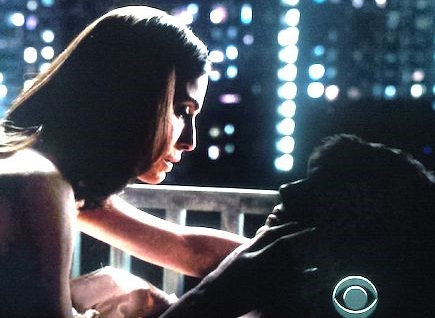 faux Will have 25 percent more hair than Josh Charles ever did? Wouldn’t a hairline, versus profile, be easier to match? Or was Alicia’s vision supposed to sound like Will but look like credit card guy?

5 | How big a skeeze does it make The Walking Dead’s Rick that he’s begun pretty blatantly flirting with a married woman? And were you surprised that the show didn’t do a cutaway to Sam-with-wet pants after Carol was done threatening the poor kid?

6 | Is Revenge staging an Everwood reunion? We could swear that picture of Ben’s ex-wife looked an awful lot like Emily VanCamp’s former co-star, Sarah Lancaster. 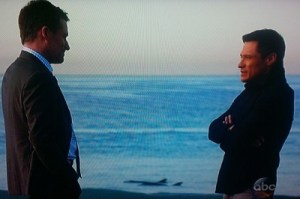 And are those real dolphins in the background?!

7 | As much as we love seeing him pop up in our favorite shows, is West Wing alum Bradley Whitford old enough to be playing dad to Brooklyn Nine-Nine‘s Jake Peralta?

8 | With the introduction of January Jones’ character at the very end of Sunday’s Last Man on Earth, is the comedy once promoted as a one-man show getting too crowded?

9 | Are you disappointed that Togetherness went there with Michelle and David in the season finale? Was it necessarily inevitable, or just a juicy way to bookend Season 1?

10 | Discuss: Would HBO’s The Jinx have had the popularity it does had NPR’s Serial podcast not primed the true-crime pump?

11 | Did Amy Schumer’s set during Comedy Central’s Night of Too Many Stars autism benefit make you wish Season 3 of her show would hurry up and get here? 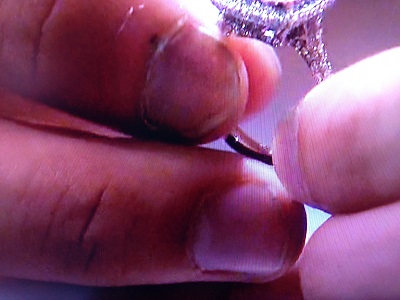 12 | Would it have killed The Bachelor producers — or the titular farmer himself — to clean the dirt from under his fingernails before “shopping” for rings? Also, has there been a less-suspenseful “Who will he pick?” finale in franchise history?

13 | Seriously, The Fosters‘ Stef, you kept a secret file on the shared laptop desktop and didn’t even give it a vague title?

14 | Regarding The Returned’s young Camille: Sure, Mom is understandably speechless. Dad, stunned. And maybe the shrink doesn’t want to alarm the girl. But really, none of the first people she runs into remarks, “We thought you were dead”?

15 | If Agents of S.H.I.E.L.D.’s Lady Sif had amnesia and only remembered bits of her childhood on Asgard, how was she familiar with the contemporary human retort, “Shut. Up!”? 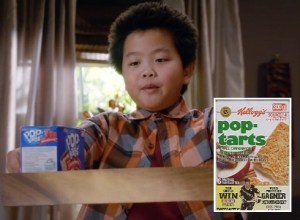 16 | In a bit of rather obvious product placement on Fresh Off the Boat, did anyone else notice that the Pop Tarts box Eddie brought to Jessica came right off a modern-day store shelf despite the show being set in 1995 (see inset)?

17 | Were you pleased or disappointed to learn The Mindy Project‘s central couple are having a boy? (And what do you imagine was Mindy’s initial reaction to the sex reveal?)

18 | Are you hoping Switched at Birth actually makes “Batter Up” into a real musical? And does it remind you of Smash‘s “The National Pastime” number?

19 | How inconspicuously, would Person of Interest have us believe, could a hobbled Flashback Finch have affixed a bomb to the underside of his target’s car? Also: Reese and the shrink — do we want that to happen?

20 | OK, let’s get theorizing: What do you think happened between Chicago Fire‘s Severide and Dr. April Sexton? 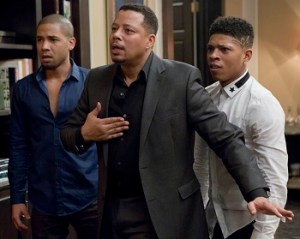 21 | Given how unrelentingly controlling Empire’s patriarch is, wasn’t it strange that Lucious let Lola leave with her mother once their secret connection had been revealed? Oh, and speaking of the tot: Who in history has ever been soothed to sleep by aggressive hip-hop? Finally, shouldn’t Derek Luke aka Malcolm be a front- runner for People’s next Sexiest Man Alive?

22 | On The 100, did you get Lost/hatch flashbacks when Murphy discovered the bunker?

23 | With the 12th-place ouster of Sarina Joi-Crowe this week, is it possible American Idol will eliminate contestants from most- to least-vocally talented this season, rather than the other way around?

24 | Was The Vampire Diaries‘ Humanity-Free Caroline channeling the episode where Buffy and Faith swap bodies?

25 | Huck’s family on Scandal sure went from screaming/calling the cops at the sight of him to spaghetti dinners and kisses-at-the-doorstep pretty quick, eh? Also: Anyone else picturing George Costanza’s fiancee (R.I.P.) every time “Susan Ross” gets mentioned?