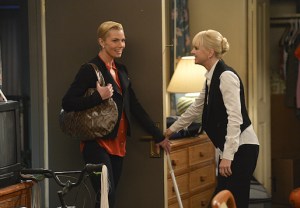 “Hi, my name is Jill” is a phrase Mom fans are likely to hear more often in Season 3: The CBS comedy has promoted guest-star Jaime Pressly to series regular.

The My Name Is Earl alum, who debuted as Christy’s newly sober pal earlier this season, will be a permanent part of the cast when the recently renewed sitcom returns in the fall, the network announced Friday.

Pressly’s Jill is rich and a handful — which proves problematic when Christy tries to help her out (but awfully fun when she needs a housesitter).

The actress most recently starred in TV Land’s Jennifer Falls, which was cancelled after one season.