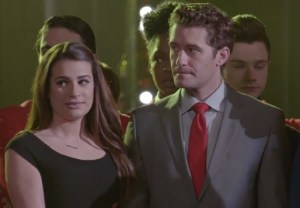 A long-awaited lip-lock, a fierce Sectionals face-off and a flock of falcons — yes, falcons! — came together in bizarre, beautiful harmony on Friday for Glee‘s penultimate outing.

Let’s start with that first one: Jesse St. James surprised Rachel at McKinley — the air traffic between New York City and Lima, Ohio, has been unreal this season — to persuade her to accept the role in Russell Simmons’ new musical, in which he just so happens to be playing the lead. In his quest to convince her, Mr. St. James pulled out all the stops, joining her in a passionate duet… and an even more passionate kiss.

That’s right, folks, drink it in… 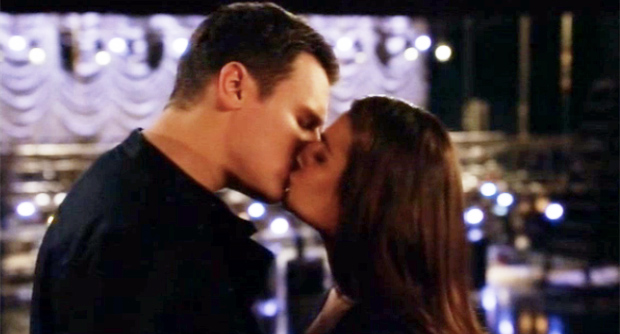 Anyway, despite Jesse’s pucker of persuasion, Ms. Berry ended up turning down his offer. Instead, she listened to Sam — or her heart, or whatever — and decided to re-enroll at NYADA. Of course, that school also being in New York, Rachel and Jesse’s paths (and mouths) are sure to cross again. After all, as Jesse said, they “make great music together.” Schwing!

(Real talk, though: I know the subject of Rachel’s romantic future has been a touchy subject for fans. Can we all agree that, if she’s to end up with anyone by series’ end, Jesse is probably the best option? Even if it’s just because of Lea Michele and Jonathan Groff’s real-life friendship and natural chemistry? Their scenes tonight felt kind of perfect.) 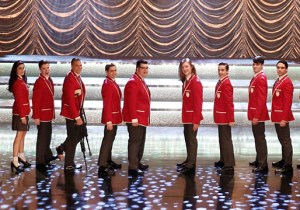 VICTORY (BY DEFAULT?) | I’ll cut to the chase here; despite Spencer’s injury and Roderick’s natural aversion to rhythm of any kind, the New Directions managed to out-perform Vocal Adrenaline and win first place at Sectionals. Actually, it’s not necessarily fair to say they “outperformed” their rival glee club, because the voting ultimately came down to the whims of a racist poodle — and we all know how unpredictable that can be. Personally, I would have handed the trophy over to the Falconers. Did any of the other groups manage to incorporate wild beasts — aside from Myron, doing a flawless impression of Sia protégé Maddie Ziegler — in their performances? I. Think. Not. But my own personal thoughts about the Falconers’ snub aside, it was great to see the New Directions placing their trophy alongside those from years past. (And don’t even get me started on the flashback shots of Finn.)

CAN WE TALK ABOUT SUE? | As I’ve mentioned in previous recaps, I have a Glee-related disorder that causes me to hallucinate quotes, musical numbers and even entire story lines, so let me just make sure I have this straight: This week, Sue “Lex Luthor” Sylvester transformed into a full-on neo-Nazi, shaving her head and screening Nazi propaganda to inspire Vocal Adrenaline in its ongoing quest to destroy New Directions. Even if she hadn’t lit Will’s car on fire, blew up the choir room or poisoned McKinley High’s drinking water — all of which she definitely did — that would easily go down as her craziest behavior to date. For Sue’s sake, maybe it’s good the series is ending; she’s a half-season away from joining ISIS at this point. And did she think Will would actually believe that she did everything to help the glee club? I’ve never been more confused by a television character’s motivations in my damn life.

And now, we play the Rating Game…
Rachel and Jesse: “Listen To Your Heart” — Rating: A-
Falconers: “Broken Wings” — Rating: B+
Vocal Adrenaline: “We Built This City”/”Hey Mickey” — Rating: B-
New Directions: “Take Me to Church”/”Chandelier”/”Come Sail Away” — Rating: B (mostly for Myron, to be honest)

So… What’d you think of this week’s episode? Were you glad to see Rachel and Jesse reunite? And did the New Directions really deserve to win? Drop a comment below with your thoughts on this episode and your hopes for next week’s series (!) finale.