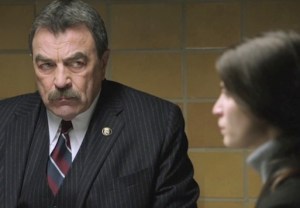 Tonight’s Blue Bloods (CBS, 10/9) takes a look at restorative justice, a process which, in part, offers an incarcerated offender the opportunity to face the victim and/or surviving kin, to in some way account for the harm that has been caused.

In this instance, NYPD police commissioner Frank Reagan (played by Tom Selleck) finds himself in a front row seat for the potentially volatile confrontation, setting the stage for an especially emotional hour.

“For cops, there are always cases that haunt them,” Selleck tells TVLine. “And in this one,” from earlier in Frank’s career, “he couldn’t prevent a mother and father and five-year-old boy from being killed.”

The story picks up with Sarah Grant, the sole survivor of that tragedy (played by True Blood‘s Amelia Rose Blaire), nearing her wedding day when she receives a letter from her family’s killer — a man who during trial said his only regret was not killing the six-year-old daughter as well — asking to meet her face-to-face to apologize for what happened.

Sarah in turn consults with Frank, whom as her surrogate father of sorts she has asked to walk her down the aisle, seeing as she sees no immediate reason to afford this prisoner any excuses, any relief of guilt.

“Frank’s attitude to the [restorative justice] program is very interesting, because he has a personal stake,” Selleck says. And that could lead him to take a stance, as a person, that the public-facing commish would never be able to entertain. “It’s always interesting playing Frank because what he would say at a press conference is not what he would say in private,” his portrayer observes. “He has feelings and opinions about this that probably are not things he could say publicly.”

Especially since, Selleck says, his character “has a kind of hyperactive sense of responsibility anyway.”

Restorative justice isn’t the “grabby” stuff of real-life headlines, but that’s what in part separates Blue Bloods from, say, the SVUs of the TV world. “[Our storylines are] generally not from the headlines,” showrunner Kevin Wade says, “but from doing some research, saying, ‘What if this dilemma presented itself to Frank? Where would it go, what would be the parameters?’ It came as most of our stuff does, out of research rather than a headline.”