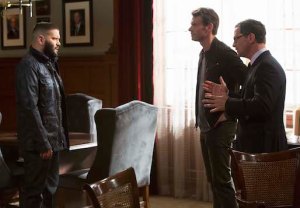 ABC’s Scandal inched closer to its “classic” formula this Thursday, as Olivia set out to fix a broken heart, the White House swung into spin mode and Huck debated doing a number on B613.

THE LAST LAUGH | Virginia senator/VP candidate Susan Ross was poised to sail through the Senate confirmation processes, until at her first passer she let loose with a rip-snorting nervous laugh, earning her instant infamy. In trade for a “big pile of money,” Leo Bergen worked his magic on Susan, though his rough touch eventually forced the senator to “quit.” After firing boyfriend Leo, Abby beseeched Olivia to get Susan across the finish line, if only because “the bad guys have been winning like crazy” as of late and Liv “could use something good right now.” Sure ’nuff, Olivia guides Susan to a successful senate hearing, though it takes a bit of crow-eating from Fitz to coax enough votes from the senators who saw the West Angola war as, Liv puts it, “a mockery of democracy.” (Meanwhile, Leo’s “firing” at Abby’s hand leads not to a break-up but instead lights a fire under the lovebirds, “disgusting” as Leo may be.)

HOLEY MOLY | In the midst of the day he hears out all the “crackpots and crazies,” David is visited by a woman whose husband supposedly works for a super-secret spy group known as B613 — and it’s Huck’s Kim! David alerts Jake and Huck to this “Diego Munoz” who gave his wife the files, forcing Huck to come clean that he is Diego. The plan is then for Huck to proceed to testify but come across as a PTSD-afflicted war vet who made up the tale, but once in front of David, and awash with flashbacks of his brief stab at a normal domestic life, Huck stops hemming and hawing and tells a gripping tale about the infamous “hole” that B613 thew its bad eggs into. Afterward, while a smiley Huck gets a kiss at the doorstep from his proud wife, Jake assumes that David will “shut it down” — but David instead is resolved to use the files to “get the bad guys” once and for all.

WILTED ROSE | Rose aka “Where’s the black lady?” resurfaces outside Olivia’s apartment, still wondering where her friend Lois (whom Olivia saw shot dead during her initial abduction) disappeared to. While Huck and Quinn seek out the corpse, Olivia realizes the true, deeply loving nature of the older ladies’ “more than friends” connection. Rose recounts how she and Lois fell in love at 16, but got separated by disapproving parents. Sixty years later, Lois called for Rose, and she moved back to D.C. Olivia affords Rose a chance to say a proper farewell, claiming that Lois was felled by a painless aneurysm while sitting on a bench by the river. Though presented with some closure, Rose laments to her late friend’s casket, “It’s still too soon…. Now I’m all alone, things will never be the same” — relatable words that prompt Olivia to take another step back towards a normal life, tossing out the stained sofa cushion (you know she probably would have actually heaved weeks ago) and sidling up to a tallll glass of red and a huuuuuge bowl of popcorn.

What did you think of this week’s Scandal?