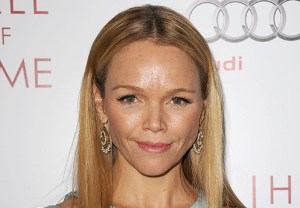 Per EW.com, Harmony’s presence will not only reveal Mellie’s past, but possibly jeopardize her presidential ambitions.

Bowles has previously guest-starred on Stalker, Mom and — on a road trip through Shondaland — Grey’s Anatomy and Private Practice.

* Calling all Community fans! The comedy’s Season 6 premiere will screen early at this year’s SXSW festival, with appearances from the cast and showrunner Dan Harmon, Yahoo! announced Thursday. The event will be held on Saturday, March 14, followed by a Greendale school dance for fans. Further information can be found here.

* Izabella Miko (Clash of the Titans) has been tapped for a recurring role on Chicago Fire, our sister site Deadline reports. She will play Katya, a seductive stripper who dreams of one day escaping the club lifestyle.

* Matador star Gabriel Luna will co-lead ABC’s upcoming drama pilot L.A. Crime, per Deadline. In the potential series’ first season — which will focus on the search for a Bonnie and Clyde-esque serial killing team — Luna will play cop Paco Contreras, one half of a partnership looking to crack the case.

* Former Sons of Anarchy boss Kurt Sutter has unveiled the official logo for his upcoming, 14th century-set drama pilot The Bastard Executioner, which tells the story of a warrior knight in King Edward I’s charge. Check it out below: