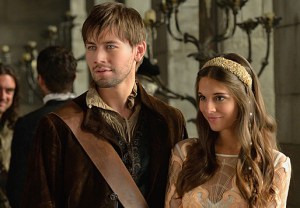 Reign returns from its wee hiatus Thursday (The CW, 9/8c), but with only seven episodes left this season, will there be enough time for Bash and Kenna to patch things up? For what it’s worth, star Torrance Coombs wants nothing more than to see the couple happy again.

“Characters grow and change throughout a show, but as an actor, you find yourself clinging to the old ways a bit,” Coombs admits to TVLine. “So the scripts come out week after week, and [Caitlin Stasey and I] both think, ‘Are they going to figure it out now? Or are things going to get worse?’ When we play these scenes out, anytime we have to fight, it just feels icky.”

Below, Coombs discusses the possibility of a Bash-Kenna reconciliation, the perils of being a ghostbuster and how Bash might play a key role in fixing Mary and Francis’ rocky romance.

TVLINE | How would you kind of describe their relationship at the moment? What really went wrong, and who’s to blame?
There’s still a lot of love there, but somewhere along the way, Bash got pretty screwed up. He saw a ghost, and suddenly, the skeptic became a believer. It doesn’t exactly go over well when your wife wants to spend time with you and you say, “I’m sorry, there’s a ghost in the town and I have to say hi.” He has a hard time convincing her that’s a valid excuse for putting off wife time. She’s not getting what she wants out of the relationship, but at the same time, he needs to do this.

TVLINE | Bash has been a bit of a ghostbuster this season. Has it been weird for you going off and doing your own thing?
Honestly, it’s just been cold. I think we had four outdoor scenes to shoot the other day, and we only got one of them done. It was so cold that the cameras were dying and my mouth was freezing. I was doing scenes just to get them done, as opposed to actually making them fun to watch. Unfortunately, being the ghostbuster comes with never being to warm up for weeks at a time.

TVLINE | Speaking of ghosts, might there be some fallout from Catherine killing Diane?
I don’t imagine that would go over very well. … Catherine’s very good at hiding bodies, so we’ll see how long it takes for old Bashy to find out about it. I can’t imagine that will go unnoticed forever.

TVLINE | I know Bash has enough problems of his own, but will he get involved in Mary and Francis’ drama at all?
Right now, Bash is unaware that Mary has gone for Conde. He knows [she and Francis are] on the rocks, but he doesn’t know the full extent. He’s been too busy carrying out deputy duties to be aware of all that. He knows his brother and Mary are hurting, though, and there will be a point where he tries to reconcile things between them — which is kind of a funny position for him to be in, given what went down in Season 1.

Reign fans, your hopes for Bash and Kenna as the season draws to a close? Drop ’em in the comments section below.