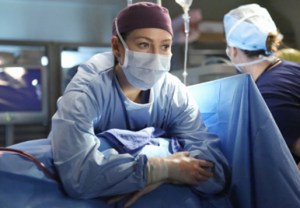 Where’s Charlton Heston when we need him? In this week’s Grey’s Anatomy, an earthquake turned Grey Sloan into a Yahtzee shaker, and wouldn’t ya know it? What it rolled was trauma, drama, a possible new couple and an aftershock that came all the way from D.C.

PHONING IT IN | Shortly after the quake hit in “I Feel the Earth Move,” Owen answered what he expected to be a routine phone call but turned out to be Ruby, an 11-year-old whose mother had fallen off a chair at their cabin. (Props for managing to make the moment that he transferred the call to a quieter area so damn tense.) When April informed Hunt that the call couldn’t be traced, he and Amelia diagnosed the mother as best they could over the phone and, with Richard’s help, saved her from suffocating by talking the little girl through basically – yikes! – surgery. (Who knew the Bee Gees’ “Staying Alive” could actually help a patient… well, stay alive?) Later, mother and daughter at last arrived at Grey Sloan by chopper, and Ruby ran into Owen’s arms. “You did perfect,” he assured her. After Amelia was able to report that the mom was going to be just fine, she and Owen celebrated by getting it on in an on-call room. (And they say romance is dead!)

BATTING A THOUSAND | From the start of the hour, Jo obsessed over Mer’s increasingly amazing track record. Surgically speaking, she was, as Stephanie put it, pitching a no-hitter. So the residents held their breath as Grey resuscitated a crashing teen. And though Alex pleaded with his girlfriend to keep her lips zipped, when Mer successfully pulled off a touch-and-go procedure in the OR, Jo couldn’t help but blurt out, “The streak’s alive,” thus tipping off Grey to the fact that she hadn’t lost a patient since November 14. (She’d nailed 89 surgeries, 22 of them trauma cases!) Afterward, Alex worried that the revelation would mess with Mer’s head. But her attention wasn’t so much on the length of the streak as the date it began — the very date that Derek left Seattle. “I’ve been perfect ever since,” she marveled, adding that maybe Karev was right and she WAS better off without her husband. Later, however, she realized that Derek’s departure had done exactly what it was supposed to – it had reminded her of who she was outside of her marriage. But that didn’t mean that she wanted out of her marriage. Not in the least. Unfortunately, when she phoned Derek’s cell to share her happy revelation, a woman answered… a woman who wouldn’t reveal her identity!

PERFECT STRANGERS? | After being trapped briefly by the quake in an elevator with a smiley radiologist named Ethan, Maggie teamed up with Callie to treat a randy 75-year-old who’d injured her replaced hip during sex. Callie wanted to operate so as to restore the vibrant horndog to full flexibility. Maggie was like, “You wanna risk her life so she can get laid?” Uh, yeah! And, regardless of the reason Callie wanted to perform the surgery, the patient still needed it. So there. During the procedure, Torres teased Maggie for going all Upstairs Downstairs on Ethan, rejecting his invitation to go on a date because, as a radiologist, he was “beneath” her. Afterward, Maggie confessed to Callie that the real reason she turned Ethan down was because of a “gap” between her and other people, a distance that she didn’t want to pretend wasn’t there. So “there’s just no point to me saying yes,” she insisted. In response, Callie called BS and encouraged her to conquer her fears. Which, at the hour’s close, she did, changing her no to a yes in the very elevator where she and Ethan had met.

IN OTHER NEWS… | While being recruited for “the plastics posse” (working title) by Jackson, Ben opened up in a roundabout way about his transitioning sister and, eventually, apologized to Bailey for having been such a tool about it all. And a note from Herman revealed that she was busy at the blind institute “learning how to not bump into things.”

Okay, your turn. Do you think Derek is cheating? Do you like Maggie with Ethan? Hit the comments.