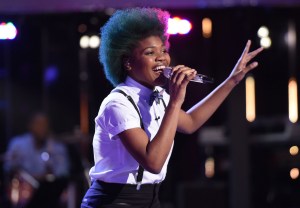 Balloons! Cookie from Empire! Uptempo ditties! You can’t say American Idol didn’t bring out all the right ingredients for its “Get the Party Started”-themed Top 11 performance episode.

With a half hour left to go, though, there were no hands (not even those of the SwayBots) in the air, waving ’round like they just didn’t care. Instead, the scene was positively funereal — with Sarina-Joi Crowe (AKA Vocal Perfection All Season With But One Glaring Exception), Nick Fradiani (AKA A Paragon of Consistent Vocals and Charisma) and Quentin Alexander (One of the Coolest Cats to Ever Slink Across My TV Screen) the only contestants still eligible for elimination. 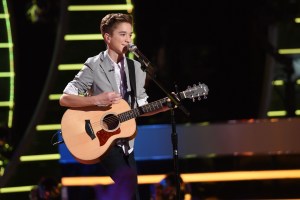 And yet that musical Chucky doll — the one with a lower register that evaporates like steam on a bathroom window, and who actually said on camera that he knows his cuteness “is a factor” (oy!) — was given the green light to menace our ears for another week?

Injustice happens every season, I know. (#LazaroOverBurnell) Outrage is a a building block of The House That Paid Off Its Mortgage With From Justin to Kelly. (#LuskyStankOverPia) And Fox really ought to reach out to Xanax or Tanqueray to replace erstwhile sponsor Coca-Cola. (#SanjayaOverGina)

Which is why Sarina-Joi’s exit — despite her confetti-shower-worthy covers of “Mama Knows Best,” “You Really Got a Hold on Me” and “Big White Room” — was something I actually predicted at the end of my Wednesday-night recap (even if I didn’t agree with it).

I want to add all the angry emojis to this recap — and the violent ones, too — but to be honest, I can’t find the motivation.

For four seasons now, I’ve watched Sarina-Joi Crowe fight and scrape and dazzle her way into Hollywood Week — and this was supposed to be her year. The premature end to her journey — and yes, I know Wednesday’s “Love Runs Out” was way below par, but still… — has left my heart like a sad balloon floating two inches off the ground behind the bleachers, the one that the high-school janitors missed in their post-prom cleanup. My soul is a cheap grocery-store birthday candle, extinguished by a toddler’s breath, licked clean of frosting and discarded in the trash. And my mind is suppressing the urge to sprint to the nearest pub and say, “Bartender, keep lining ’em up!”

And with that said, let me offer my letter grades and reviews for tonight’s performances:

Top 11 Performances
Rayvon Owen – Ellie Goulding’s “Burn” — Grade: C+ | The rapid-fire lyrics and intricate rhythms of Rayvon’s song choice led to unprecedented breath-control/pitch problems. Even more troubling, though, was my impression that Rayvon didn’t feel any authentic connection to the words he was singing. Where’s the guy who breathed new and aching life into Sam Smith’s “Lay Me Down” during the House of Blues showcase? Dude either needs to let us into his story — or risk being frozen out of the competition. (Side note: Were the judges being serious telling him this was his best performance to date — or was it a Jedi mind trick to send him to an early encounter with the guillotine?)

Maddie Walker – Jason Aldean’s “She’s Country” — Grade: B | Maddie’s mic technique felt a little iffy tonight — she held it awfully close to her mouth on the big notes, no? — but for at least half the performance, I saw and heard a star fighting to get out of her cocoon of nerves and inexperience. I’d have liked two extra inches on the teenager’s denim shorts — and a 20 percent decrease in notes that fell just under pitch — but girlfriend’s a work in progress worth following. 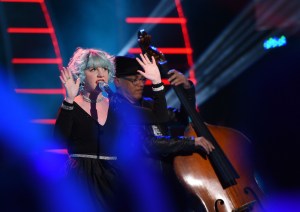 Joey Cook – Iggy Azalea (feat. Charlie XCX)’s “Fancy” — Grade: A- | The most fearless, creative performance of the season thus far — Joey took a Postmodern Jukebox arrangement of the ubiquitous rap hit and took the audience on an unexpected sonic adventure. Her stylistic boo-boo-be-doo proved to be a nice juxtaposition to the ultra-modern lyrics, and if she can start believing she belongs there — the occasional flash of panic in her eyes wasn’t convincing me — she could be the weirdest Top 5 finisher in recent memory.

Clark Beckham – The Doobie Brothers’ “Takin’ It to the Streets” — Grade: B | This was a completely competent performance by Clark — but when Harry called it “impressive without being inspiring,” I knew exactly what he meant. Sure, Clark ticked all the boxes — he sang in tune, looked handsome, played the piano very well — but where was the fresh twist or sense of spiritual urgency? The more I think about it, the more I’d rather see Clark swing for a homer and completely miss (like Jax, for example) than to go for the bunt and leave us wondering “Is this all there is?”

Jax – Taylor Swift’s “Blank Space” — Grade: D+ | I sincerely believe (and hope) that Jax has enough good will from her past performances — we’re not forgetting “Bang Bang” right? — that she ought to survive this faint carbon-copy of a current pop hit. But for folks tuning in for the first time this season, there’s no way they’d have guessed that this tuneless gasptastrophe was being delivered by a woman who’s widely considered a Season 14 front-runner, is there? As J.Lo astutely put it, everything that makes Jax special got “swallowed up” in the execution (or lack thereof).

Qaasim Middleton – Paul McCartney & Wings’ “Jet” — Grade: C- | Keith’s credibility went “poof” and disappeared like a magician’s dove the minute he said “I loved it!” I mean, when Qaasim is whirling and twirling and getting us caught up in his outsized energy, his vocals become a secondary consideration. But watching him stuck mostly to a mic stand and strumming his guitar tonight, I was struck hard by the guy’s inconsistent pitch and woeful enunciation (I swear I only understood every fifth or sixth word). Plus, portions of the performance were so cheesy, I half wondered if Qaasim was serving up parody. 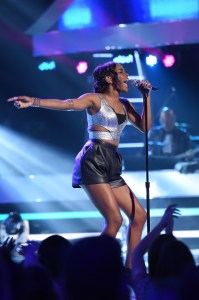 Adanna Duru – Bruno Mars’ “Runaway Baby” — Grade: B+ | Sure, Adanna hit a couple bumps in the road vocally — although about 50 percent fewer than usual, no? —  but her saucy stage presence and “I’m not sorry ’bout it” sexuality were anything but boring. Still, will America vote for that kinda performance? We’ll have to wait and see, though I’d advise Adanna that she should never, ever, ever tell Ryan Seacrest in a post-performance Q&A that she proved herself — that’s up to the audience to decide, girlfriend, OK?

Tyanna Jones – Janelle Monae’s “Tightrope” — Grade: A- | Darn near perfect vocals — with just the right combination of explosion, restraint and pep. Plus, J.Lo’s right — this kid is glowing like a lightning bug during your lakeside summer vacation. (Sorry — the melting, dog-excrement-covered snowbanks of Jersey City sometimes send my mind floating toward a distant August weekend.)

Daniel Seavey – Pharrell Williams’ “Happy” — Grade: D+ | I’ve heard teacup poodles sneeze more forcefully than half the inaudible notes Daniel attempted tonight. So c’mon and be kind, pay no mind to Keith’s unspeakable “we’ll see you next week” prediction, and instead — by avoiding text votes and saving yourself the cost of a cup of coffee — help a child get back to his education!

Quentin Alexander – Adele’s “Rolling in the Deep” — Grade: B | I’ve got to be honest and admit that the almost tribal percussion and subdued backing vocals erased the relentless propulsion from Adele’s glorious hit — and that Quentin hit a dozen or so notes that made me say “Hrmmm.” That said, the end result remained weirdly beautiful and uniquely Quentin’s… or, perhaps, dude actually did put a spell on me on Top 24 night. 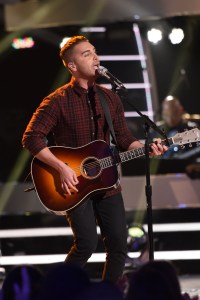 Nick Fradiani – Avicii’s “Wake Me Up” — Grade: B+ | Nick’s really, really good — but he needs to start infusing his performances with some kind of dynamic explosion if he wants to truly be a contender. The spoken-word “weight of the world” line was as crisp and tart as the first bite of an orchard-fresh apple — but there wasn’t much payoff thereafter in the dude’s arrangement. I’d like Nick to either combust by rocking out a song that’s not known for that energy — or dial it all the way back and lasso us in with a whisper. (Sir, our request has been made, so get to it!)

“Save Me” Performance
Sarina-Joi Crowe – Demi Lovato’s “Neon Lights” — Grade: B | Girlfriend has a monster voice — but “Neon Lights” is such a surface-level pop hit, Sarina-Joi never had the opportunity to bend the judges to her will. (Also, there were some definite “Gack! I’m a goner!” nerves surfacing in the opening half of the performance.) Still, one of the worst early eliminations in Idol history, though… I truly believe that.

On that note, I turn it over to you! What did you think of Top 11 performance night? Who were your faves? Who’s at risk? And should the judges have used their only Save of the season? Take our poll below, then sound off in the comments!