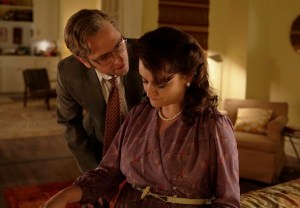 Warning: The following contains spoilers for Wednesday’s episode of The Americans.

A big secret was declassified on Wednesday night’s episode of The Americans when the listening device Martha planted for Philip at the FBI was discovered.

“The sh-t has hit the fan, and the fan is going to keep on whirring,” portrayer Alison Wright says with a laugh.

Now, Martha’s position at the agency is “not only in jeopardy, but she could be going to jail,” the actress shares. “If she were to get caught with this [device], her whole life is down the toilet, and she could very well end up in prison.”

In light of the big twist, TVLine chatted with Wright about Martha’s gnawing suspicions about Philip and whether the reappearance of her gun foreshadows a deadly encounter with her hubby.

TVLINE | She has quite a breakdown right there in the office when the bug was found.
[Laughs] She’s not a professional at dealing with these kind of things. I don’t think she’s ever thought about it being discovered like that. I don’t think she’s ever thought about what would happen if it were to be found and what it would mean. It sends her into complete panic mode. I don’t think Clark has prepared her for, “What if it’s discovered?” Because that would have meant him telling her he wasn’t really in on the operation. I don’t think there was a contingency plan that she knew about it. So it’s just a panic situation now.

TVLINE | Has Martha managed to get the suspicion off of her? Or do they come back around to her?
The suspicion is on everybody at the moment at the office. This is something that’s going to be taken very seriously. It’s almost like there would be a shutdown, and everyone is under suspicion at the moment — Martha not more so than anyone at this point. But she’s going to have to try her best to keep it that way.

TVLINE | What’s going through her head when she makes the decision not to tell Philip what happened?
When the Office of Professional Responsibility comes in, that’s a flag for her. Because that shouldn’t have been happening if this was an inside job. If this was an Internal Affairs investigation, the Office of Professional Responsibility wouldn’t be coming in. And the fact that they do makes her not know anything, but just know that something is wrong. Something is not right. When she doesn’t tell Philip right away, she just needs a second to try to figure out what could possibly be going on.

TVLINE | How much is she starting to clue into the fact that Philip isn’t being honest, not just about work, but also about their relationship?
There’s always going to be an element of her being suspicious and worried about, “Is there another woman? Or is there another family?” She wants to go to the apartment and see that everything’s OK and that there’s an apartment there and that there’s no other family there. But something in her, some alarm bell has gone off, and she’s not telling him immediately what’s happened. The fact that he comes into her apartment that night and doesn’t know what happened in the office, doesn’t know that the bug has been found, doesn’t say, “Oh, my God, Walter Taffet from the agency was over there this afternoon,” alarm bells are going off for her. But she’s not putting pieces together yet. She’s not there yet. There’s just some unconscious, unsettling feeling that she has that makes her want to take a second and just take a breath. 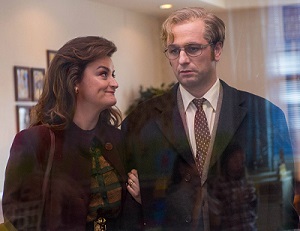 TVLINE | When the season started, she wanted to have a family with Philip and then suggested they foster a child. Is that still something she’s interested in? Or in light of recent events, is that low on her priority list now?
That’s something she definitely wants, whether it’s to have her own child or to foster or adopt. I think she would be suspicious of Clark’s character if it were something that he kept denying and kept refusing, and I’m sure Philip is aware of that. These people are trained to know exactly what their target would want and how to best respond to that and surprise them with those things. So Philip would be onto that… It’s something that she wants and needs and something that she would be very good at. So I don’t think she’s going to give it up, no. It’s a natural progression for her.

TVLINE | When I talked to [executive producers] Joe Weisberg and Joel Fields at the end of last season, they said Martha’s gun is like Chekhov’s gun. You see it in the first act, it’s bound to go off. We saw it again in this episode. Should we be concerned?
I was going to give you the same quote about Chekhov’s gun. What I can say about it is, again, some unconscious instinct that she has — whether it was the slaughter of that family in Alexandria or something about her own personal situation — has made her feel unsafe and like she may need to be able to protect herself. Something has made her feel unsafe. Whether that’s Clark or the situation, we don’t know yet.

TVLINE | I had this very uneasy feeling during this episode that she was going to point the gun at Philip at some point. Am I totally crazy?
No, not at all. She’s in major panic mode here. Who knows if she’s going to point it at herself, as well, one day? We don’t know yet. But it’s there. And she knows how to shoot it now. We’ll have to see.