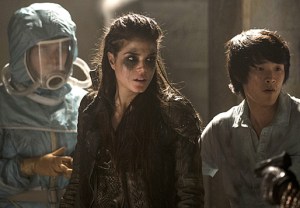 As promised, The 100‘s second season finale on Wednesday wrapped the epic saga of Mount Weather, claiming a surprisingly high number of causalities in the process — even for this show. So what’s next for those left standing?

First, a quick recap: After shooting Dante in cold blood, Clarke and Bellamy radiated everyone on Level 5, killing countless innocents, including Maya. Upon returning to Camp Jaha, Clarke was so disgusted by her actions that she took off into the woods, potentially never to be seen again. Meanwhile, Jaha and Murphy — the sole survivors of Team Rowboat — arrived at a mysterious mansion, where a holographic lady revealed that she’s in possession of the nuclear warhead. Dun, dun, dun! (Oh, and Lincoln finally put an end to Cage’s miserable life in spectacular fashion. Gotta love him!)

Below, executive producer Jason Rothenberg breaks down the finale’s biggest moments for TVLine, then gives us a (pretty sizable) taste of what to expect when the show returns next season. 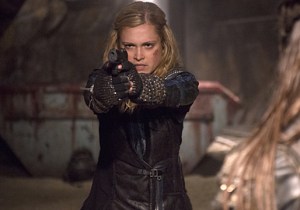 TVLINE | Clarke was making so much progress as a leader this season, but now it seems she’s reached her breaking point.
For me, the whole season has come down to that moment in the end where she’s faced with that decision: Will she or won’t she kill every man, woman and child in Mount Weather in order to save her people? At some point, does the good guy have to become the bad guy to get that done? If you remember back to Episode 1 of this season, Clarke had her hand on another lever; she could have pulled it and killed people, but Jasper talked her out of it. Now her hand is on this lever, and she pulls it. It’s with Bellamy’s help, but ultimately, it’s her choice. So I knew she’d be tested, I knew she’d do it and I knew she’d be broken by it. So she’s done. She’s got to get out of there. She can’t deal with what she’s done.

TVLINE | Not that I doubt her survival skills, but what can you say about her time away from the group? What’s she going to do out there alone?
It’ll be strange for her people, for sure. More interestingly, the question is: When we find her, is she just on a walkabout in the woods, trying to chill out, or does she find the lack of a mission impossible, like a soldier returning from a war? There’s that great scene in The Hurt Locker where the guy’s in the grocery store and he just couldn’t function. Is that the journey we find for Clarke? I’m not saying if it is or it isn’t, but it’s definitely an interesting possibility.

TVLINE | So it’s not like little kids who threaten to run away and only end up going down the street?
[Laughs] No, I don’t think so.

TVLINE | Fans are still reeling from Lexa’s betrayal. Have you thought about where they might see each other again?
First of all, I hope they see each other someday. Second of all, I do think it was a betrayal and Clarke felt broken on multiple levels. Here was a woman she came to respect and count on and she was completely abandoned by her. It’s not something she’ll get over anytime soon, but as the dust clears and she wraps her head around what happened, she’ll probably be able to understand why Lexa did what she did. Lexa never lied; from the first time they spoke, Lexa said, “Love is weakness.” In that moment, she proved herself to be a woman of her word. She lives by what she preaches, so as hard as it was, I think Clarke will be able to understand it. That doesn’t mean she’ll forgive her, but she’ll understand her. 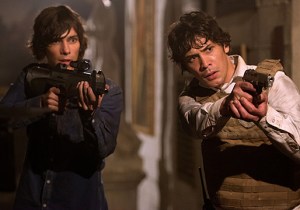 TVLINE | Jasper seemed understandably upset when Maya died. Might that trigger a shift in his character?
Jasper’s character probably underwent the biggest change this season; he lost Clarke and Bellamy as leaders and was forced to lead that group of people and boost their spirits. He did that with the help of Maya, who he fell in love with, and he believed he’d found a way out that could save everybody — and that was taken away by Clarke, Bellamy and Monty’s decision. Going forward, things are going to be difficult for Jackson and Monty, which is heartbreaking for me because I love their friendship. I don’t know where it leaves him; he’s definitely heartbroken. … But he’s got his goggles!

TVLINE | Yeah, let’s talk about that. Will next season have a more futuristic vibe?
Futuristic, yes, but in a weird way, it’s also going to go back to the past. 2052 is when the world ended, and it’s 97 years after that that the show began, so one of the things we’re doing with this ending is getting back to how it all began. It’s a totally new element for the show. It’s a more technological thing, for sure. We’re going to play with how the world ended in the first place, and hopefully, we’ll upend some expectations.

TVLINE | Was there any significance to using “Werewolves of London”?
There’s a significance to me, personally. In that moment, for the first time in 100 years, power was returned to that bunker. The song that you can imagine was playing when the power went off comes back on, and that’s what that moment was. On the first stereo system I ever got, when I was 11 years old in Michigan, the first song that came on the radio was “Werewolves of London.” That’s the only reason we used that song. That and I thought the mood was great.

The 100 fans, your take on the insane season finale? Are you worried about Clarke, all alone in the wilderness? Any theories about Jaha’s new lady friend? Grade the episode below, then drop a comment with your full review.