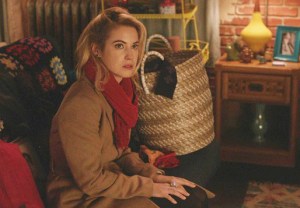 Warning: The following contains spoilers for Wednesday’s episode of Hindsight.

That’s a line not from Lost, but from Wednesday’s season finale of Hindsight, which found Becca once again destroying her friendship with Lolly despite trying to fix the past. (That’ll happen when your BFF finds out you’ve been hiding the fact that you had an affair in the future with the guy she loves.)

Now, Becca is screaming to go back — but to where? To find out the answer to that question — as well as  how all this time traveling is happening — TVLine chatted with creator Emily Fox. (VH1, if you’re reading, we so need a Season 2 after that cliffhanger!)

TVLINE | When Becca says, “I want to go back, I want to go back,” is she talking about going back to 2015 or starting this whole thing over again in 1995?
She feels like she’s hit rock bottom. She’s taken what looked to be a golden opportunity and it’s turned to straw. She has reached a moment of such desperation, and she knows in her bones that she’s screaming at nothingness. She has this feeling of being completely alone. Going into this closed box and screaming at the abyss is a moment of great desperation on her part and 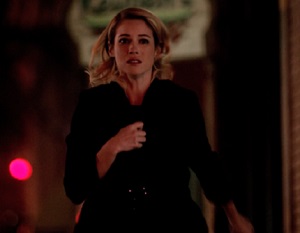 great defeat. We all want to go back, without being super specific about where we want to go back to. The real message is, “I’ve got to get out of here.” She realizes, as she’s realized continually from the beginning, that she’s playing with fire and it doesn’t matter where you are, because you’re always going to have to face your problems, your decisions, the consequences of your decisions.

TVLINE | When the doors open, it seems like she’s looking up at somebody. Is it supposed to imply there’s somebody outside the doors?
We joked in the writers’ room that the doors open and there’s a T-rex. [Laughs] Be careful what you wish for! I don’t want to give anything away about what’s outside the elevator, but we loved the idea of the mystery. Suffice it to say, it’s an interesting moment.

TVLINE | In your head, do you know which of these many, many guys Becca is meant to be with?
I think I do, yes. We don’t have a second season pickup, but we have a grand design of what could potentially happen. We have always come into this with a bigger picture and understanding of what’s going on. You have to do that if you have a time-travel show, or you better have it. [Laughs] You better have some road map, or you’re going to get super, super lost. In my mind, even though a lot of Season 1 focused on Becca’s romantic jigsaw puzzles, we’ve always had the notion that this is bigger than just love. There’s more to it than figuring out who Becca’s supposed to be with romantically. Obviously, we focused on the friendship with Lolly, and that was one of the great joys… writing a female friendship that felt authentic and intimate without being romantic, because that’s just fun to write. A big part of being in your 20s is figuring out who you want to be and who you want to be with, and we definitely have a notion of Becca’s continuing journey.

TVLINE | If you do get a Season 2, will you explore how this is all happening?
Yeah, that was always our intention for continuing to tell the story. With a story like this, the design was always to tell a story that started out feeling very intimate and then build upon that… We’ve always taken a very philosophical approach to the show itself. It’s never meant to be an instructional video on time travel, because we all know that time travel is impossible. We’re not going to have a flux capacitor. With that said, you want to feed the imagination of the audience by giving them more and more and more… You start to see the plants growing from all the seeds that you buried in Season 1, and if we have the opportunity to do a Season 2, we’re hoping to see a lot of those start to bloom. 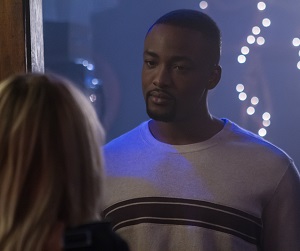 TVLINE | There’s a lot of curiosity about the bar patron/newsstand guy (played by Collins Pennie) that Becca encountered. Does he have to do with the mythology?
I won’t say yes or no, but he’s definitely a significant character in our confection of the mythology. I’d say he’s one to watch, without giving too much away. I love that people speculate about him. It brings me joy to see [online comments] like, “My husband and I had a long talk about that guy.” I’m so happy people are talking to their husbands about this show. That’s, to me, the victory in all of this. It’s such a female-driven show… so the fact that a lot of guys are like, “I made my girlfriend watch this show with me,” that’s amazing. It thrills me to my core. There’s lot of strong male points of view in this show through these various guys. It was always supposed to be a show about Becca, but also be a show about her group of people. All the men in her life, including her brother, are drawn very distinctly, and I’m glad people are interested in the guys as well.

What did you think of Hindsight‘s mysterious ender? Is Becca really as terrible a person as Lolly said? And what’s your theory on Pennie’s stranger? Grade the episode via the poll below, then hit the comments with your thoughts. 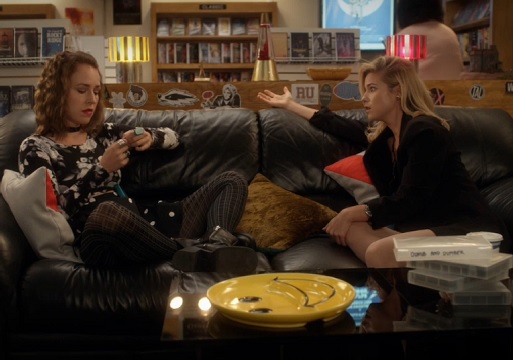