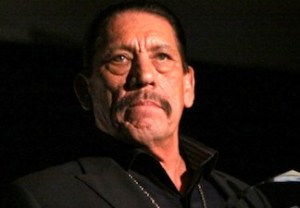 After capturing America’s hearts in Snickers’ Brady Bunch-themed Super Bowl commercial, Machete star Danny Trejo is joining the cast of From Dusk Till Dawn: The Series — where he will literally capture people’s hearts.

Trejo will appear in Season 2 as “The Regulator,” a terrifying doer of misdeeds who is summoned in order to “perform a deadly errand.” He previously appeared in the Dawn film franchise as “Razor Charlie.”

Also new to the El Rey Network drama is Briana Evigan (Longmire) as Sonja, an American tattoo artist who also produces fake passports on the side.

* Will Ferrell is partnering with Major League Baseball for the Funny or Die special Ferrell Takes the Field, airing later this month on HBO. Dedicated to the fight against cancer, the special will follow Ferrell as he takes a crack at every position during MLB spring training. (You can follow his exploits live on Twitter by looking up #FerrellTakesTheField.)

* Answer: Wheel of Fortune‘s Pat Sajak and Vanna White, and Jeopardy‘s Alex Trebek. The correct response: “Which three game show host have renewed their contracts through the 2017-18 TV season?”

* Logo has released a new trailer for its upcoming dramas Cucumber and Banana, which hail from Queer as Folk creator Russell T. Davies. The interwoven series premiere Monday, April 13, at 10/9c.