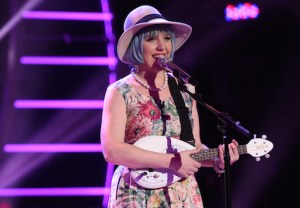 Imagine an American Idol with Jennifer Lopez rocking a powder-blue Amish dress from the Pennsylvania Dutch Collection, Ryan Seacrest losing his cool and an audience of SwayBots successfully moving in time with the music.

None of those signs of an impending apocalypse occurred on tonight’s Season 14 Top 12 announcement/performance episode, but the hour was not without its share of whopping surprises.

The human equivalent of a frayed nerve, Joey Cook, pulled it together and became an unlikely front-runner — at least for a night. The usually flawless Sarina Joi-Crowe saw her sense of pitch scamper down the freeway like an escaped llama on the nightly news. And the hypnotizingly good Quentin Alexander needed a damn Wild Card to earn a place in the Top 12, his failure to garner more votes than Daniel Seavey being akin to Aretha Franklin losing her Queen of Soul title to an un-AutoTuned Katy Perry.

OK, OK, I’m exaggerating — just a bit. But no more so than Keith Urban telling Daniel he’s just a song choice away from musical greatness. Keith, you’ve got children of your own. What in the love of Lazaro Arbos and Sam Woolf is stopping you from saying, “Go back to high school and focus on your studies, young man!”?

I don’t mean to pick on Daniel — but he’s the clear No. 12 in a 12-artist lineup, and yet I think someone with more talent and potential will wind up getting the axe on Thursday’s Top 11 telecast.

Until then, though, let me offer my letter grades for tonight’s performances — along with the pithiest of reviews. (I’ll be back before 11pm ET to update this recap with more detailed commentary, I promise!)

Sarina Joi-Crowe — “Love Runs Out” — Grade: C+ | It didn’t help that the sound mix made it sound like the Idol band was playing down the block from Sarina, but the usually pitch-perfect diva was about a quarter-step above the note for at least half the song. Good thing she’s got more charisma that at least four or five of her competitors combined. Please, America, let’s remember her perfect pair of Detroit-round triumphs — and give her another take!

Rayvon Owen – “Wide Awake” — Grade: B- | Very pretty vocal — I think a couple of his high notes were actually delivered via heavenly cherubs — but Rayvon’s physical stiffness and failure to dig beneath a surface-level reading of the song’s lyrics left me as bored as I was back in high-school trigonometry class.. We know he’s capable of better — so here’s hoping he has a chance to prove it.

Daniel Seavey — “Hallelujah”/”Straight Up” — Grade: D | Bad enough that Daniel’s whiffle-ball bat hit nothing but air when he missed his cue into the bridge, but The Curious Case of His Disappearing Upper Register was so obvious, even Harry had to take notice that the kid is out of his depth. But just because he’s the obvious choice to finish No. 12 for those of us with functioning ear drums doesn’t mean his “awww golly, he’s so cute!” factor won’t buy him a Top 10 finish.

strong>Maddie Walker — “Suitcase” — Grade: B | The night’s least-known but possibly coolest song choice proved Maddie definitely deserves a Top 12 spot. She sang mostly in tune and did a nice job of tapping into the sly humor of the lyrics, too. If she can get the nerves completely under control, she could be a Season 14 dark horse. 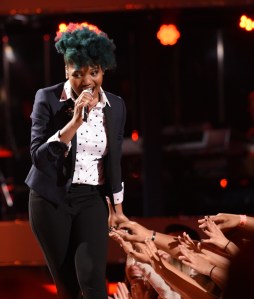 Tyanna Jones — “Wings” — Grade: B+ | If Tyanna becomes a huge star and starts marketing a signature fragrance, it should definitely be called Pure Joy. Yeah, the opening half of the song had a few pitch problems — slightly better breath control would help — but as Keith noted, if it looks, dresses and sings like a star…

Nick Fradiani, Jr. – “In Your Eyes” — Grade: B+ | Nick’s performance didn’t quite build to the dramatic crescendo I was craving — OHHH I WANNA SEE THE LIGHT IN YOUR EYES — but it was rock-solid and soulful, and proved he’s got great taste in music, too. The fact that the season’s oldest contestant managed all this despite some unripened-lemon sour backing vocals is a testament to his skills. (Seriously, those employees of Rickey Minor sounded like they were performing on a small yacht during heavy storms after taking a dose of Dramamine. #woeful)

Jax — “I Want to Hold Your Hand” — Grade: B | Jax’s breathy upper register is prettier than sunlight at 6pm — praise daylight savings! — but things got a little pedestrian when she got up from the piano for a very good karaoke-bar cover in the back half of the Beatles tune. Of course, maybe the problem was that given the all-too-brief length of tonight’s performances, any singer who chose to have a tonal shift at the midway marker risked coming off as almost schizophrenic.

Qaasim Middleton – “Sir Duke” — Grade: C+ | It’s hard not to get caught up in this cat’s wayward energy and impeccable showmanship — but (not to quote Randy Jackson), this is a singing competition. And in terms of pitch and enunciation, Qaasim’s “Sir Duke” was a garbled, growly mess. Don’t get me wrong, I’m love-love-loving the Emperor of Stage Presence, but vocally speaking, he has yet to prove his clothes are the genuine article.

Clark Beckham – “It’s a Man’s Man’s Man’s World” — Grade: A- | This performance shall also be known as “How Blue-Eyed Soul Got His Front-Runner Status Back.” OK, Clark’s not quite Joshua Ledet yet, but this was, as J.Lo noted, the vocal of the night. Clark’s fearless abandon to the music — and his instincts for when to stray from the confines of the original — are thrilling. Now let’s see if dude can pull it off on a current-ish record. [Side note: Show of hands — who agreed with Harry’s comment about the James Brown classic being majorly “chauvinistic”? And who shook their heads and said, “this dude scores an ‘F’ in Lyric Comprehension 101?]

Joey Cook — “King of Spain” — Grade: A- | The blue-haired Queen of Idol Quirk backed up her highly stylized tendencies with a really fine vocal — and the bravery to try something different on show that too often serves “I Have Nothing” and “I Don’t Want to Miss a Thing” as microwaved leftovers. OK, I’d like Joey to stop adding “o” sounds to her vowels — “side” ≠ “soy-de”— but she’s already performing at a higher level than previously “unique” Idol chicas like M.K. Nobilette, Megan Joy, Lacey Brown, etc. 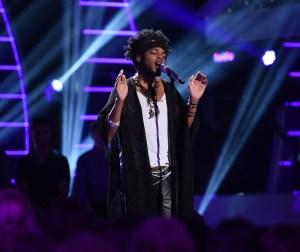 Quentin Alexander — “Royals” — Grade: A- | Harry was right — there were pitch problems. Somehow, though, the depth of emotion and elegant phrasing of Quentin’s performance transcended my typical role as Picky McComplainerstein. (And no, I did not tick him up from a B+ just because of his beautiful tears of joy… although I will admit they warmed my heart!)

Adanna Duru — “You and I” — Grade: B+ | Like Quentin, the night’s other Wild Card didn’t hit every note square on the nose, but her boot-stamping physicality and “I’m playing to a sold-out arena” energy provided the kind of excitement that some of her more accurate competitors didn’t. Next week, it’ll be vital for Adanna to prove she’s got the technical ability to compete with her more consistent rivals, but I’d be shocked if her fervor didn’t springboard her at least into the Top 11.

On that note, I turn it over to you! What did you think of Top 12 performance night? Who were your faves? Who’s at risk. Take our poll below, then sound off in the comments!