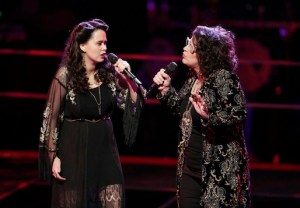 Questions that raced through my mind during Tuesday’s installment of The Voice:

Is Pharrell the most altruistic celebrity in the history of reality-singing competitions? Why is Blake Shelton utterly charming — even when he’s shanking his opponents with a shiv fashioned from clumped-together Starbucks straws? And did I suddenly develop a knee-jerk love of underdogs or were all of Tuesday night’s steals on The Voice superior to the opponents who vanquished ’em?

To be honest, it’s hard to come to any solid conclusions after a two-hour telecast packed with a half-dozen Battles featuring at least five or six vocalists with the kind of talent to inherit Craig Wayne Boyd’s crown and ‘stache.

Still, though, it seemed to me as though The Falsetto Behind 1,000 Hooks often chose the lesser his two artists — at least when he thought the more talented vocalist might prompt a competing judge to hit his or her button for a Steal.

And yes, while I was jarred by the viciousness of Blake’s pitch to Meghan Linsey — in which he pointed out how Adam had three of the final four artists in The Voice‘s seventh season, yet “managed to screw the pooch” for all of ’em and lose to Blake’s country fella — it still somehow felt congenial, collegial and well within the confines of NBC’s shiny, happy talent show.

With that said, let me get to ranking tonight’s Battle Rounds in order from least- to most-promising winner:

6. TEAM ADAM: Blaze Johnson defeats Michael Leier on “Rude” | This utterly pedestrian duet was like a glass of tepid tap water served midway through a stellar five-course feast. It’ll take major improvement — or a calculated decision by Adam to advance a pawn for voting-round sacrifice — if Blaze is going survive past the Knockout Rounds.

5. TEAM BLAKE: Cody Wickline defeats Matt Snook on “How Country Feels” | I agreed with Adam that Matt’s vocal was stronger, but Cody’s superior charisma evened out the matchup — leaving Blake to choose the younger guy who’s just a buzz cut and a tighter Henley away from possible heartthrob status.

4. TEAM PHARRELL: Paul Pfau defeats Meghan Linsey on “Don’t Let Me Down” (Meghan stolen by Blake) | Halfway through this Battle, my ears relegated Paul’s sweet but indistinctive voice to the background, the better to focus on Meghan’s head-to-toe raspy testimony. When Blake jokingly said he “wouldn’t pick Meghan” as the winner — despite clearly favoring her — it was clear Pharrell was going to sacrifice her in order to make sure both halves of his matchup survived. And while that might make him the worst strategist in the competition, it also makes him the most artistically pure, no?

3. TEAM PHARRELL: Anthony Riley defeats Travis Ewing on “Get Ready” (Travis stolen by Blake) | Anthony’s a total beast — he possesses a big, utterly accurate voice with a keen sense of rhythm — but there’s a slightly affected showiness to his phrasing that leaves me a little cold. Travis’ smoke-infused instrument — while not quite as muscular — better communicated the earnestness and urgency of the lyrics. If Blake didn’t merely choose him as cannon fodder, Travis could go Top 10 — or higher.

2. TEAM XTINA: Sonic defeats Ameera Delandro on “Masterpiece” | The most mismatched duo of the night found the tremulous, terrified Ameera transforming into a dishrag with which the confident, booming Sonic wiped the floor. The latter chica might want to avoid Jessie J going forward — the similarities are almost too striking — but her spot-on pitch and vocal dexterity definitely moved her up a few notches in my personal Season 8 pecking order.

1. TEAM BLAKE: Sarah Potenza defeats Hannah Kirby on “Gimme Shelter” (Hannah stolen by Pharrell) | No one is ever going to top Merry Clayton’s  co-lead vocals on the Stones’ original, but damn these ladies did their darndest. Sarah’s thick, sometimes gruff tone really suited the subject matter, but some of her rhythmic choices drained the song of its inherent drama. (She’s pretty groovy, though, don’t get me wrong!) For my money, Hannah’s maniacal banshee attack of the melody was the more effective approach — and if Pharrell doesn’t saddle her with one of his “unique” arrangements or pit her against Tonya Boyd-Cannon in the Knockouts — she could be one to watch.

Your turn. What did you think of Night 2 of The Voice‘s Season 8 Battle Rounds? Who were your faves? Take our polls below, then sound off in the comments!