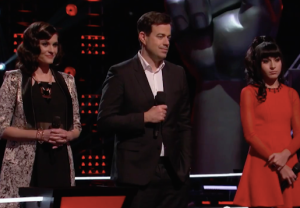 Like an overstuffed deli sandwich that leaves your jaw and your stomach simultaneously dialing 1-800-Too-Much, The Voice jammed the end of its Season 8 Blind Auditions and the start of its Battle Rounds into a single two-hour telecast tonight.

Now that the action-packed telecast is done, however, I’m pleased to report I am not requiring a smoothie of Zantac, Tums and warm milk.

After all, we heard oodles of fantastic singers — and better still, no potential winners wound up covered in bus tracks at the end of the 120-minute extravaganza.

BLIND AUDITIONS
5. Vance Smith — “Reach Out I’ll Be There” (Team Xtina) — Supercute guy who thinks of his mom as his superhero — but some of those extended notes played out like his Kryptonite.

4. Paul Pfau — “Fly Me to the Moon” (Team Pharrell) — Geeky charmer sounded rock solid on an old standard, but didn’t really give it much in the way of unique energy. Watch, he’ll go and win the whole thing now and make me look like an idiot.

2. Nathan Hermida — “Sure Thing” (Team Adam) — Science-loving, glasses-wearing guy proved a study in understatement — and while he didn’t choose the range-iest ditty, his tone was wonderfully warm and inviting.

1. Caitlin Caporale — “Impossible” (Team Pharrell) — Nerves hindered those quieter notes in her lower register, but once Miss Thing got to belting, she actually proved herself a match for Xtina at her feathers-unfurled showiest.

BATTLE ROUNDS
3. Team Blake: Brian Johnson defeats Joshua Davis on “Knockin’ on Heaven’s Door” (Joshua stolen by Adam) — I far preferred Joshua’s exquisite gravel-liciousness, and dude has a legit shot at the crown if Adam doesn’t sabotage him. Brian’s got real horsepower, too, but there’s an R&B affectation that creeps into his delivery that’s not entirely pleasing.

2. Team Adam: Tonya Boyd-Cannon defeats James McNeice on “P.Y.T.” — Tonya’s tearful breakdown in the arms of her husband and kids was one of the more moving moments in Battle Rounds history. And her effortless swagger on “P.Y.T.” showed she’s more than just a whopping instrument — she’s legit fun, too.

1. Team Pharrell: Mia Z defeats Ashley Morgan on “Put the Gun Down” (Ashely stolen by Xtina) — This one ranks up there with the all-time great Battles. Mia’s tone is divinely unique — and she’s got great passion and stage presence — but Ashley, as Xtina noted, appears to have zero vocal flaws. Can’t wait to see what they do next.

What did you think of this week’s Voice proceedings? Who were your faves? Take our polls below, then sound off in the comments!