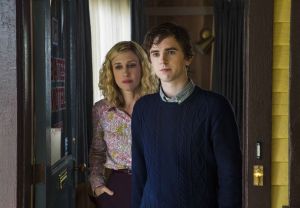 But before Norman has time to even consider fulfilling his destiny, Norma catches him spying on the leggy guest and promptly flips out. “You’re the hotel manager now,” she bellows. “You can’t be skulking around the hotel rooms staring into the guests’ bathrooms. It’s. Not. Normal.”

An embarrassed Norman promises it will never happen again before slinking off to his bedroom. He’s not done with his call-girl crush though. Not by a long-shot.

But before we get to the episode’s climactic moment, let’s quickly run down the key takeaways from Bates‘ premiere:

R.I.P. FRANCINE | Norma learns early on that her estranged mother has passed away and there’s an inheritance with her name on it. She can care less — about the death or the dough. Her brother Caleb, however, offers his share of the estate to nephew/son Dylan, who also wants nothing to do with the loot. Nor does he want his uncle/father hanging around. (Mark my words: That money will come into play sooner rather than later.)

NORMAN GETS SCHOOLED | Norma decides to home-school Norman after his first day of senior year proves disastrous (nice to see you again, Mrs. Watson!). Emma catches wind of this and decides she wants to do the home-school thing too — and right alongside Norman. (Is it really that easy?) Also, Emma informs Norman that her lung capacity is diminished “like a lot,” and he responds by finally asking her out on a date. But not because she’s dying. Just because… “it’s time.” Emma’s giddy, priceless response: “It’s been time for a while.”

BACK TO THE GUEST IN ROOM NO. 4 | Annika stops by the office to ask for directions and Norman offers to serve as her personal GPS device. It quickly becomes clear that helping her find her way into town is at the bottom of his to-do list. This is confirmed when he returns to the hotel driving her car, and she is nowhere to be seen.

Do you think Norman whacked Annika? Was Norman playfully cooing to bedmate Norma, ‘Move over, you silly woman,’ your favorite moment? (‘Cause it was mine!) What did you make of the premiere as a whole? Grade the episode below and then sound off in the comments!